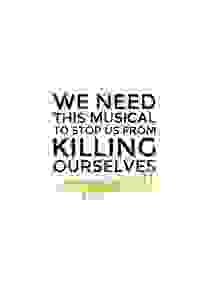 We Need This Musical To Stop Us From Killing Ourselves

WNTMTSUFKO is an irreverent musical comedy about a frustrated therapist who is strong-armed into creating a musical with two of his suicidal patients, Sarah, a struggling singer, and Mitchell, a failing actor. More…

Nothing seems to go quite right for them, however, and their aspirations for success must take a backseat to their newfound friendship. Part of Soho Playhouse's 2018 Fringe Encore Series.

See it if You want to see a completely silly (in a good way) show that doesn’t take itself too seriously. Cute fun songs and plot.

Don't see it if You’re looking for serious storyline or talent. It’s all fun and games here.

See it if you enjoy a good laugh with some basic music with hilarious lyrics on dark subjects. Energetic cast delivers what could be a future hit.

Don't see it if you are bothered by bare bones productions with canned music and simple costumes and props.

See it if You want to see an evolving musical in development. You like dark comedy. You want to be entertained. You like small, scrappy musicals.

See it if You need a good laugh but the topic is not a light.

Don't see it if If you like that some topics are a no no. You want a smooth show.

Also Made into a way to laugh at yourself. That its OK not being fine. A laughing at yourself is OK. Funny songs, sometimes the singing is off; but that OK.... Read more Read less

See it if you want to see a cute, funny little show with potential. Charming cast could sparkle with some polish. See it; it was fun.

Don't see it if you're expecting a lavish Broadway musical; this is three people with some catchy songs.

See it if a delightful little musical, controversial because of subject, is worth your theater dollar.

Don't see it if you are offended because mental illness is treated with a nod and a wink.

Also Many reviews have suggested that this show can be flushed out to make it a full scale musical. Given the subject I doubted it, but I was wrong.

It can't be done with the show's current resources, but "new" characters are all ready in the show and primed to be introduced into the show's main body. Moving from three actors to 8-12 and live music is an expensive proposition and probably beyond the resources of the creators, but hopefully a producer with vision has seen this start and is willing to make an investment in the show's future.

NOTE: one of the current show's best songs is time sensitive and would have to be dropped from any major production.

Don't see it if you're remotely bougie, don't like small productions, & have NO sense of humor. This small/short mess is HYSTERICAL, & it won't be for you.

We hope it continues to be worked-on & maybe grow further to become a full-on production. Could be perfect for Off Broadway, w/a stronger book & additional songs.

Tough subject-matter(s) - therapy, depression, suicide - but we knew it was a DARK comedy & we were re-warned pre-show by one of the performers. We smiled thru-out, laughed a ton (especially w/1st BIG song by the therapist), & many in the audience gave it a standing-ovation. Even w/an audience papered w/family & friends (SO WHAT) it was a great nite of silly fun, good/positive energy & laughter.

Bit thin singing from the 2 supporting roles (therapists' patients), but the male lead (therapist) makes up for it. Great voice, solid acting.

NOTE: 1st time we EVER had to stand on line OUTSIDE of Soho Playhouse. Excellent for them to get a near sold-out early-evening weekend crowd.

See it if The cast is super. The topics are so important and so timely given the climate of our world today. To laugh out loud is so healing. See it!

Don't see it if You can't deal with humor that deals with deep-seated issues.But it won't kill you to be brave and and try laugh-therapy! Honest!!!

See it if You want to see a silly show that's half jokes about musicals and a jokes about therapy and suicide.

Don't see it if You might be upset by taking suicide lightly.

See it if You love black box intimate theatre, musicals, small cast, dark humor, topics explored differently, and not afraid of making light of your

Don't see it if Own struggles. Don't see if you're sensitive to psychological issues, cussing, and don't like a few actors playing many. It's about 1-hour

Also Long. There was a great talkback afterwards. The cast really cares about our feedback. They're hoping to make it 90-minutes long. My friend, who's "struggling", liked it. Singing could be better, but, it's good!... Read more Read less

See it if The run is over but if it comes back in a fuller production it should be worth a look.

See it if you are open to musicals with small casts that focus on dark comedies.

Don't see it if you dislike themes of depression and suicide, or want a big flashy musical.

Also The cast members are definitely comedians first and singers second, but the songs were clever and catchy! There's definitely still work to be done, but I found this hour very enjoyable.... Read more Read less

Don't see it if You expect a well produced show

See it if you're interested in a premise focused on therapy, depression, suicide; you like supporting scrappy indie efforts; you need a few laughs

Don't see it if you prefer polished, big-budget musicals; you can't see the "lighter side" of a suicide attempt; you dislike dark humor; you hate therapists

Also Very interesting talk-back on Nov. 27th explained a lot about the show's background. Co-written by a therapist, it was staged in California as a 25-min show. To be entered into The Fringe, the creative team had to ramp up the content.

The premise -- that 2 depressed performers on the brink of suicide can be restored & cheered up by writing a musical -- is unrealistic, obviously. But this modest 3-person show is also not afraid to make jokes about suicide.

The audience seemed to take the premise as it was intended -- not as a real-life remedy for any suicidal adult but as a light-hearted, playful look at a down-beat subject that is too often in the headlines.

See it if you like funny shows with serious overtones.

Don't see it if if you are unhappy with humor about serious problems.

See it if You enjoy new work from new writers. Theatre that shines a humorous light on unfunny subjects, while managing to be relevant.

Don't see it if Jokes about a depressive state and suicidal ideation trouble you.

See it if you wanna see a clever take on the "Let's Put on a Show!" format. you like to think you are dark and edgy but stay within your comfort zone.

Don't see it if you want real edge, or can't stand ersatz edge. You don't like disneyfied recorded scores. And wtf, no sets yet long scene changes?

See it if You want to see a Fringe musical with three sweet actors.

Don't see it if You’re expecting to see any subtlety in the piece.

See it if you want a lighthearted look at suicide. You don't mind musicals that still feel like they're being workshopped.

Don't see it if You're looking for a really polished piece by experienced musical writers.

Also A fun, dark-humor filled show that could blossom into something more. For right now, it feels a little too compact and definitely a little too absurd at times, but that's the limitation of the length.... Read more Read less

Don't see it if you're bothered by the themes - depression, anxiety, suicide

See it if you like scrappy little musicals that are simultaneously funny and edgy and are not afraid to treat sensitive subjects with a bit of levity.

Don't see it if you are triggered by talk of suicide, depression, feelings of failure, professional and/or emotional lack of fulfillment, in song and dance.

Also Full disclosure: Though I would have loved to stay for the whole thing, I had another engagement that I had to leave early for. So I never found out how the story ends!

Before the show, an actor spoke to the audience to warn us that, although no disrespect whatsoever was intended towards those who struggle with suicidal feelings or depression, the subject would be treated with some levity, and we were invited to laugh at things depicted on stage that we might otherwise be afraid to find funny.

With that said, the next hour (of which I saw 45 minutes) was a romp through an unlikely story of two would-be Los Angeles performers who decide to create a musical show to combat their suicidal feelings brought on by professional failure. They recruit their therapist to help them, though it flouts ethical practices and threatens his career.

See it if you like intimate shows and dark humor. Talented cast and refreshing perspective on a somewhat taboo topic. Has a lot of potential.

Don't see it if you want a heavily produced or light-hearted show. If you could be triggered by the topic of suicide.

See it if You want to see a work in progress having the makings of a fun and funny musical. Great songs, endearing cast, but short run time.

Don't see it if You want to see a more polished, full length musical; or the topic of suicide upsets you.

See it if you love musicals—even if they purport to be irreverant (subject matter: suicide! oooh!) but are just traditional musicals w/trite endings.

Don't see it if you: are expecting anything cutting edge; have a low tolerance for banality; don't usually like musicals; know what irreverent really means.

See it if you want to be entertained and laugh. you work in the mental health sector or have some connection to therapy.

Don't see it if you don't enjoy humor that plays on serious topics. You expect a very profound and thought provoking show

“Totally inventive. A home run for first time musical theater playwrights Lyman and Rosick accompanied by a very lively, Adyn Wood...A not so dark, irreverent dark comedy about a frustrated therapist, Dr. Hansen, who reluctantly agrees to participate in creating a new musical with two desperate p...
read more
Get Alerts Alerts On Alerts Off
“Fresh and engaging...The writing duo goes head to head with the typically weighty and unaddressed topics of suicide, self-worth, and failure...Their combined experience is what separates this musical from those poking fun at mental health, offering, instead, solidarity and empathy to those who s...
read more
Get Alerts Alerts On Alerts Off
for a previous production "Delightfully twisted...Even in the darkest recesses of life, there are often opportunities to extract some humor, which is what this show cleverly accomplishes...This all nimbly transpires on a small stage with a few pieces of office furniture. Despite the grim subject matter, the show cleverly ...
read more
Get Alerts Alerts On Alerts Off