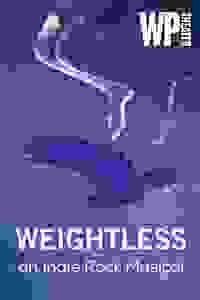 View in admin
Weightless
NYC: Upper W Side
81
Buy tickets from $25 on TodayTix
Score it Scored!

A show that mixes animation, rock music, and storytelling into a unique musical.

Blending together ancient myth with indie rock, "Weightless" tells the story of two deeply devoted sisters, separated by circumstance, who must journey across worlds and make devastating sacrifices in order to be reunited.

Inspired by a story from Ovid’s Metamorphoses, "Weightless" is a visual concept album—with the cast being the band— that blurs the line between actors and musicians, between musical theater, video art, and rock concert, and between the virtual world and the real one.

See it if Concert-styled musical featuring a sisterly relationship. It's a small theatre allowing for a more intimate experience.

Don't see it if you are not a fan of smaller shows/ want larger commercial works, loud rock music, and want a traditional theatre experience.

See it if you enjoy indie rock and nontraditional theater.

Don't see it if you are looking for a traditional musical. This is a staged rock concert. Read more

See it if You enjoy storytelling. In this case the story is a fable of the gods told through an indie rock concert. The band is talented/singing good.

Don't see it if You want a traditional musical. This is really a concert telling of a fable. Some parts get a little loud if you’re sensitive to that.

See it if you like loud rock music used to tell a story. Good voices and the music is fine but there is little to grab you as theater-it is a concert.

Don't see it if you do not like loud rock music for 75 minutes or you are looking for a theatrical play or musical with acting.

Don't see it if You need a big set and lots of moving parts. It's mostly concert-like singing.

See it if you like a very unusal show about sisters and gods. It's like a mini rock opera. The band and singing are fantastic. Good original music.

Don't see it if you don't like rock music or like traditional plots. The story of the sisters and gods is over the top but enjoyable. Read more

See it if You appreciate good music and creative story telling.

Don't see it if If you want traditional theatre only.

"Unless you're a fusty classicist unwilling to entertain a little revisionism, you're going to have a good time at 'Weightless,' a perfectly enjoyable spin on a perfectly dreadful tale."
Read more

The Kilbane’s' lyrics can be a tad pedestrian at times, and they aren't too fussy about their rhymes, but the script has good bones, and the music deftly exploits various rock styles, embracing the narrative's extended emotional range with songs that are, alternately, tender, wicked, furious, and transcendent. As played by a crack musical ensemble, they keep us engaged in the sisters' wildly changing fortunes, their descent into tragedy, followed by an ultimate moment of transcendence.
Read more

"Weightless" is performed as if it were a concept album staged as a concert with the characters all played by the six member band who sit or stand on the stage placed on various platforms. Peiyi Wong’s set design does not allow for much stage movement and Tamilla Woodard’s direction does not give the actors much to do in the way of stage business. However, the storytelling is clear and the characters well defined.
Read more

"There are different levels in their performance of 'Weightless'...that gives it meaning and strength far beyond a musical performance. 'Weightless' is definitely worth your time and attention."
Read more