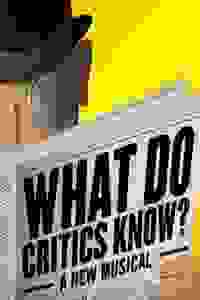 View in admin
What Do Critics Know?
NYC: Midtown W
82
Score it Scored!

What Do Critics Know? NYC Reviews and Tickets

Part of the New York Musical Theatre Festival, this new musical comedy tells the story of three powerful theater critics who have taken countless shows off the stage, and must now put one on, in a strange twist of fate.

The theatre critics for the NY Times, the NY Post and the Herald Tribune must race against the clock to produce their own show. Desperately, they enlist the help of a struggling Broadway writer, Nathan Wood. Nathan has had a string of critically-panned flops and needs a comeback. Can the critics pull through despite their overly critical natures? Can cooperation, harmony, and perhaps even love exist between an artist and a critic?

See it if You enjoy singing rather than screaming, lyrics that are clever and decipherable, a kind a jaunty, zany show that Comden & Green did.

Don't see it if You don't like to engage your brain and if you are one of those annoying twits who is constantly checking email. If you're next to me-death

See it if You know enough about the theatre industry to be entertained by caricatures of theatre critics.

Don't see it if The names "Ben Brantley" and "Michael Riedel" don't mean anything to you.

See it if You like classics, great music, great acting and a good laugh.

Don't see it if You're thing is pop/rock musicals.

See it if If you enjoy the golden age style of musical, this is a must-see! From the music, acting and set, it's classic like Broadway used to be!

Don't see it if If you don't enjoy beautiful music and laughter, then don't see this show.

See it if you want to have a great time, laugh a lot, see a clever, original premise and hear a melodic, catchy score that won't leave your head!

Don't see it if you're only looking for cutting-edge, contemporary theater.

"Composer and songwriter are trying to make a comment about the difficulty of creation and the role observers can play in the artistic process. But that lesson plays as though it was tacked on to a less-intellectually-taxing answer to 'The Producers...' The resulting show isn't much fun at all."
Read more

"'What Do Critics Know?' turned out to be a very pleasant surprise, filled with vibrant dance numbers, a lush, beautiful score and seamlessly energetic direction by Michael Bello. A long life should be in store for such a delightfully brainy show...The show is such a hug to theatre lovers, that all one wants to do is get in on some of the lovin.'"
Read more