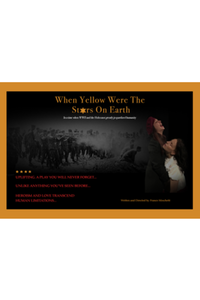 View in admin
When Yellow Were The Stars On Earth
NYC: Chelsea
48
Score it Scored!

When Yellow Were The Stars On Earth NYC Reviews and Tickets

One night in Berlin, 1943, during an SS raid, a German cabaret singer opens her door to save a Jewish Resistance fighter. As the hours unfold, destiny winds their lives tightly together until there is no turning back. 'When Yellow Were the Stars on Earth' is about two rarely examined realities: Jewish female fighters and Germans who died refusing to be part of the Nazi machinery. Amidst the atrocities of WWII, these women transcend enemy lines and, in their final moments, make an ultimate sacrifice for love.

See it if you are interested in a highly personal view of WWII Germany vis a vis Jews as seen through the eyes of a small resistance cell.

Don't see it if you are sensitive to the Holocaust, if you are unable to separate out acting from story. Unable to watch violence against women. Many left.

See it if you find value in a piece if the story concept itself has potential.

Don't see it if any of this: eclectic, inconsistent accents, self-indulgent and sometimes self-important writing, predictability. Needs a solid workshop.

Don't see it if You cant deal the holocaust

See it if you like WWII pieces otherwise don't.

Don't see it if Very weak and cliché writing. Actors were alright, but nothing too exciting happening here.

See it if You enjoy amature productions. Also, if you are interested in shows about Nazi Germany and the plight of the jews.

Don't see it if You are expecting a well-written, well-acted production.

See it if You enjoy period pieces that reflect on enourmous human tragedy and suffering. Slow start and long narratives caused a rushed ending.

Don't see it if You need an intermission and the persistence of happiness. The set was limited but still caused unnecessary delays during changes.

Don't see it if The most dramatic thing about this play was the music, The film clips shown were not the best selected. actors didn't create tension Read more