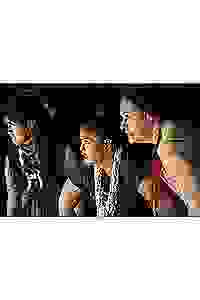 View in admin
Wild Dogs Under My Skirt
NYC: Soho/Tribeca
79
Score it Scored!

Wild Dogs Under My Skirt NYC Reviews and Tickets

A theatricalization of the poetry of Samoan New Zealander Tusiata Avia, this piece offers an examination and celebration of what it is to be a Samoan woman.

Samoan New Zealander Tusiata Avia’s poetry becomes a fearless and enchanting piece of theatre under the direction of Anapela Polata'ivao and a cast of six powerful Pasefika actresses.

Breathing provocative new life into Avia’s examination and celebration of what it is to be a Samoan woman, Polata'ivao’s direction adds “extra levels of nuance, power and dramatic sophistication” which earned her Best Director in the 2016 Auckland Theatre Awards.

Through her vivid, compelling and at times hilarious characters, Avia paints a deeply personal view of Pacific Island life and its sometimes uneasy collisions with the Kiwi way. Heart-stopping and unmissable theatre.

See it if A play about polynesian/ samoan life and culture. Has some humor, interesting dancing and gives you insight into its life.

Don't see it if Has some violent stories to it as well as themes. If your not interested in samoan culture.

See it if you want exposure to Samoan gender issues including how women and transexual roles include food and sex abuse. Good dancing/bits of humor.

Don't see it if you want to understand it all & it's your first exposure to Samoan culture: accents, foreign language, cannabalism. Not a play-a performance

Don't see it if You are not interested in a powerful physical performance that is occasionally confusing & drawn out. Multiple slices of life; no plot. Read more

Don't see it if you are expecting a play - no plot, little character. Very exotic.

See it if Strong, Bold and Raw about Samoan Women with dancing/singing with different topic threw out this whole performance.

Don't see it if Accents and you want a story show.

See it if Somoan women who won't be confined by Dusky Maiden/Pacific Princess stereotypes unleash primal rage in story:"We have forgotten our women."

Don't see it if Some thick accents and syntax."Don't wear the trouser,except in the town/All the mens they like it too much Samoan/I'll wear you likeacloak" Read more

See it if You want a view of Samoan women w/their issues of gender roles, sexuality & stereotypes from other countries, in particular New Zealand.

Don't see it if You don't want a collection of stories. You want those stories linked better: it was difficult to figure out characters' relationships... Read more

See it if You want a look at a culture that we see very little theater about. An excellent performance by fierce women.

Don't see it if You want to understand everything, don't like being a little lost, don't like different cultures, can't stand vulgarity.

"A powerful and engrossing study of the lives of Samoan women and their uneasy cultural collision with New Zealand. Unfortunately, at the performance under review no program was given out to explain that the Pacific Island actresses each played discrete characters."
Read more

"A rhythmic, exuberant and startling work of theater that resembles Ntozake Shange's choreopoem …a fierce, lively cast… there is enough that's both clear and compelling to transcend the barriers of language and culture - or, more precisely, to connect with our own."
Read more