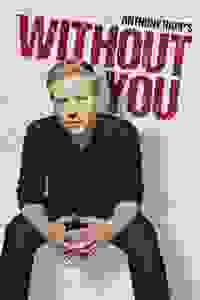 View in admin
Without You
NYC: Midtown W
86
Buy tickets from $68 on TodayTix
Score it Scored!

Without You NYC Reviews and Tickets

Anthony Rapp's solo musical show, adapted from his memoir of the same name.

In 1994, actor Anthony Rapp was 22, broke and working at a Starbucks, getting ready to audition for a new musical by a young writer named Johnathan Larson. That musical became the earth-shattering phenomenon Rent. But that's just the beginning.

Backed by a five-piece rock band, Rapp shares his story about the early days of Rent in this intimate evening of unbridled joy and unspeakable loss.

See it if You are a fan of Rent or enjoy a personal and poignant show about loss. Rapp is an excellent singer and actor.

Don't see it if You are triggered by loss. You want to know more about Rapp’s career since the death of his friend, Jonathan Larson, and his mother.

See it if you enjoy backstage stories. He's an engaging personality. Rent isn't my favorite show but I enjoyed the creation story. Audience loved it.

Don't see it if You don't like one-person shows. Or you aren't interested in the Rent story. I don't think the show has a well-written ending, despite the Read more

See it if Rent was a show that you loved. This is a must see for fan’s of Anthony Rapp and Rent. Very touching and easy to connect to. Great singing.

Don't see it if you are not ready for heart tugs. This is a show that many will shed a tear. If you didn’t like Rent’s music, you probably will not enjoy. Read more

See it if Fan of Rent, to hear Rapp sing & tell story of Rent & J. Larson from his perspective, along with soul-baring telling of personal loss.

Don't see it if Not a fan of Rent or the music of Rent. Don’t like personal soul-baring retrospective story-telling. Can’t bear stories of loss of mother. Read more

See it if If you are a fan of Anthony Rapp!

Don't see it if You are looking for a lot of behind the scenes information about Rent.

See it if You love Anthony Rapp, are a Renthead, and enjoy autobiographical one-man shows. This one is especially poignant; bring tissues!

Don't see it if You like only "happy" music and typical theatrical plots, and you don't enjoy shows that dig deep emotionally.

See it if you love RENT and want to get a first hand behind the scenes trip through history.

Don't see it if you don't know the show RENT, or are looking for an incredible cabaret type singer. Read more

See it if I was blown away both by the nostalgia and the treatment of grief. I was an emotional puddle. This is a must-see.

Don't see it if you don't appreciate intensely personal one-person (not counting the bad) shows.

“The memoir did not offer much by way of introspection on the subject, but there were glimpses into a personality that appears more complicated, darker even, than the one we get onstage.”
Read more

“ ‘Without You,’ smoothly directed by Steven Maler, allows Mr. Rapp to revisit the striking story behind the musical’s creation, but he also galvanizes the memory by performing some of its best-known songs.”
Read more

“Rapp doesn't quite succeed in integrating his two throughlines, making ’Without You’ feel like two separate shows at once...Rapp's effortlessly affable persona, however, keeps 'Without You' largely entertaining nonetheless.“
Read more

“ ‘Without You’ is a supremely moving experience, and one that anyone who has loved and lost will relate to.”
Read more

“It's an honest look back at a tumultuous time, a series of life-altering experiences packed into a few crowded, exhilarating, heartbreaking months.”
Read more

“The reworked 2023 ‘Without You’ is a testament to his standing by this simultaneously joyful and grieving conviction.”
Read more

“It’s an example of the sort of self-indulgence that prevents the 80-minute musical memoir from fully achieving its goal of transforming personal loss into art. Nevertheless, ’Without You’ should prove irresistible to fans of the performer and especially the show that jump-started his career.”
Read more

But the strongest connection between "Rent" and "Without You" is aural as the latter's score is mostly an assemblage of songs from the former that Rapp and composers David Matos, Joe Pisapia, and Daniel A. Weiss augment with their own rock-opera inspirations. To be sure, it takes chutzpah to invite side-by-side musical comparison between yourself and a Tony winner, an act for which Rapp and his fellow collaborators would merit some biting criticism, if the entire endeavor didn't spring from such a well-meaning place. Although there's not much director Steven Maler can do to hide the seams in the score, keeping them visible is actually the appropriate choice.
Read more