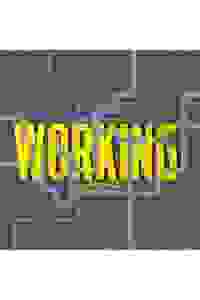 Based on the Studs Terkel book of the same name, "Working: A Musical" celebrates the vital roles played by those who make our country run. Starring Andrea Burns, Helen Hunt, Christopher Jackson and Javier Muñoz.

Originally adapted by Stephen Schwartz and Nina Faso, Off-Center’s new incarnation incorporates fresh stories from City Center’s own staff, in honor of our 75th Anniversary Season, alongside old favorites such as “Just a Housewife,” “Millwork,” and “Fathers and Sons.” Two new songs by Lin-Manuel Miranda enrich the score by an already illustrious and eclectic list of songwriters: Craig Carnelia, Micki Grant, Mary Rodgers and Susan Birkenhead, and James Taylor as well as Schwartz.

Don't see it if you want polished prodn. Choreog amateurish, then disappears. Songs uneven. City Center thread becomes tedious...and why so much nepotism?

Don't see it if u seek a fully-staged production; u want any new insights into what it means to be gainfully employed (or not); u expect a plot or storyline Read more

See it if Timely revival of musical about the populist joys/woes of work & its weighty place in American ethics Very well sung/acted; Burns steals it

Don't see it if Despite its potency in current affairs, overall effect is rather listless & doesn't resonant Newly drafted tribute to City Center shines

77
Series of clever songs that illustrate how important work is to feed the stomachs & souls of the working poor; but forgettable

See it if insightful at times moving lyrics; strong performances particularly by Chris Jackson; shows how work links the generations

Don't see it if song showcase, rather than a musical w a plot; few show-stoppers; dated view of work not addressing MeToo/ inequality/the undocumented Read more

See it if Hear/singing about people in all different jobs (plus about Employees of NYC Center).

Don't see it if Not a fan of singing musical, no flash Read more

See it if Great performers, singers & dancers; terrific band; Helen Hunt is a pleasant surprise with her singing/acting; Christopher Jackson is a joy.

Don't see it if The disappointing part is the music which starts to get boring 1/4 of the way in; Working has really never worked in all its incarnations.

See it if you want to see two pros—Andrea Burns and David Garrison—steal the show.

Don't see it if you have the opportunity to see another production of "Working". Read more

80
Revue of songs with differing views on work

See it if Talented cast of singers handle songs by various composers about how much the characters like or hate their jobs. Four dancers are excellent

Don't see it if David Garrison's song "Joe" by Craig Carnelia about a retired working stiff, made me sad. Why doesn't this bored guy ever go to the theater?

"For the 75th anniversary of New York City Center, the creators of this season’s Encores! Off-Center summer series of staged concerts came up with the charming idea of interviewing City Center employees and weaving their stories into the fabric of a show...I wish that the show in which they appear — each in a multitude of roles — were similarly quirky and spontaneous-seeming. Yet there’s a weariness about this latest version of 'Working.'"
Read more

"This latest iteration, performed by a cast of eight talented principals, shows why the material remains relevant and relatable...As for the presentation, it's pleasantly entertaining, if somewhat lacking in vitality — marred by some static staging, abrupt transitions and a problematic sound mix on opening night. It doesn't exactly make a revelatory case for the disjointed musical, but it showcases the sui generis piece's singularity."
Read more

"This well-intentioned but forced reworking leads to uneven results in what is otherwise an enjoyable and high-spirited 90-minute production...The City Center-focused monologues do not fit in well with the rest of the musical and tend to be slow and repetitive. However, it was a novel idea to pay tribute to the people 'working' all around the audience. It also leads to a visual surprise at the end."
Read more

"The lovely thing about Anne Kauffman's Off-Center production is that it's delivered with a wholesome spirit of generosity and gratitude, and expects nothing in return...It's one of the more modest productions City Center has seen in recent years...This production hasn't been created for City Center's regular patrons, but rather is a long overdue gift to the workers who keep those patrons safe, secure, and entertained."
Read more

"Comes thrillingly and most entertainingly alive...Truly, it shouldn't be effective at all...But thanks to a splendid cast that includes the highly talented Helen Hunt, Andréa Burns, Javier Muñoz, Christopher Jackson, Mateo Ferro, Tracie Thoms, and David Garrison, along with smart and spritely directing by Anne Kauffman, what you get is not just a series of songs, but a series of self-contained musical plays."
Read more

"Javier Muñoz and Andréa Burns are grateful in Miranda’s 'A Very Good Day,' concerning immigrants biding time and sending money to families who have yet to immigrate. Needless to point out, the threnody is extremely resonant in 2019. In the intermissionless 90 minutes that 'Working' entertainingly takes up, director Anne Kauffman does her own work with the kind of effortless effort that some but not all workers (depending on the kind of demands put on them) are able to achieve."
Read more

"It’s a lovely tribute to City Center and its dedicated staff. Whether their stories mesh smoothly into this production of 'Working' is debatable. But that’s always been the issue with this musical...As for the songs, Jackson has a great time with Grant’s jazzy 'Lovin’ Al' and Javier Muñoz does well with Schwartz’s emotional 'Fathers and Sons,' but it’s the women who really clean up."
Read more