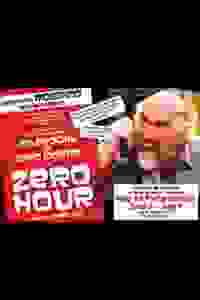 It's July 1977 and the actor is giving his final interview before leaving for a pre-Broadway tryout of 'The Merchant' in Philadelphia. Mostel only played one performance as Shylock before his sudden death at age 62. 'Zero Hour' traces Mostel's early days growing up on the Lower East Side as the son of Orthodox Jewish immigrant parents, through his rise as a stand-up comedian, from the Borscht Belt to Manhattan's most exclusive supper clubs, and from the devastation of the blacklist to his greatest Broadway triumphs, most notably as Tevye in 'Fiddler on the Roof.'

See it if You want to see one of the best one man shows I've ever seen. This show has it all, a great story arc, depth, comedy, history. Great acting!

Don't see it if I can't imagine anyone not liking this show. Even if you normally don't go for one person shows this one feels different to me.

See it if Entertaining bio of a colorful person. Many funny and interesting stories. Excellent performance.

Don't see it if You don't like biographical plays or one person shows.

See it if you enjoy a powerful one man show about a fascinating person. Brochu gives a masterful performance. He look and sounds like Mostel.

Don't see it if you don't like one person shows or Zero Mostel. You feel like you are witnessing a person with all his emotions and opinions exposed.

See it if You want to peek into the life of an interesting Broadway personality and if you want to hear more about the black list. I was engrossed.

Don't see it if You don't like one-man shows. Jim Brochu is multi-talented, and if you can ever catch one of his shows, don't miss it.

See it if you admire great acting. Jim Brochu inhabits Zero and some of his memories (especially about the Blacklist) are truly moving.

Don't see it if you dislike one-man shows.

See it if You are interested in Zero, how he got the nickname, How he felt about and fared during the McCarthy era, how he met his wife of many years.

Don't see it if Here Zero is more a surface character than a person of substance. Some of the words carry real pain and concern, but they are just acted Read more

See it if you wan an amazing portrayal of Zero. He has Zero down perfectly -- from speech patterns to mannerisms. Poignant, funny, and charming.

See it if Funny, enjoyable, interesting- a Delight

Don't see it if Can not think of a reason. Even people who normally avoid one person shows should like this.

"In manner, voice and mind he is unmistakably Zero Mostel...While the performance and the play are both thoroughly engaging, those who saw the previous two-act version may find this one a bit incomplete...But even in this shortened form, 'Zero Hour' effectively paints a portrait depicting the artist as he might like to be remembered; brilliant, defiant and highly entertaining."
Read more

“For 90 enthralling minutes, Brochu dramatizes and enacts the remarkable life and career of that unforgettable performer…His sensational acting is matched by his heavily researched and very skillfully constructed script…The success of the production is abetted by Piper Laurie’s meticulous and creative direction…Every moment is staged with aesthetic focus and ingenuity, preventing the show from ever becoming static.”
Read more

“Even those who already know this colorful rags-to-riches account of a poor Brooklyn boy whose father was a 'street rabbi' and whose mother never forgave him for marrying a 'shiksa' - or who don't think they need yet another iteration of the blacklist saga and the naming of red-tinted actors by Jerome Robbins and his ilk - will appreciate the illusion of hearing about it all from Mostel himself. I mean Jim Brochu, of course, but when you're watching him it's really one and the same.”
Read more

"The absolutely best solo performance I’ve ever seen in my life...Those 90 minutes were the 100% most enjoyable hour and a half I’ve spent in years. Jim Brochu deserves a double A+ for impeccable playwriting and a flawless performance. Director Piper Laurie rates several hip, hip, hip, hurrahs for her discrete direction and for impeccably maintaining the ideal balance between Mostel/Brochu’s chutzpah and anguish."
Read more

"A helluva piece of writing...This deeply researched piece, as personal as it is historical, illuminates Zero Mostel. Peppered with anecdotes, jokes, and insults, its serious depiction of reasons for the subject’s dark side provides affecting, whiz-bang dramatization...Brochu is so filled with energy, so present, it’s as if he’s performing early in the run of a new show...This is less a purposeful imitation than top-notch channeling...Laurie has done a wonderful job of utilizing the stage."
Read more

"Zero’s back in town, and the town is jollier for it...In this new incarnation, if anything, the author and star is more formidable, more unpredictable, more voluble—more Zero. He also resembles Mostel more than ever, to an almost scary degree...Director Piper Laurie entertainingly keeps him pacing and blustering and registering satisfaction when the audience laughs, which is also often...It’s a fully stuffed hour and a half. And a fun one."
Read more

"'Zero Hour' is a wonderfully funny evening of theater...The unseen hand in this performance is that of Piper Laurie, the stage and screen actress, who handled the directorial duties. Brochu was never still, but his movements around the stage all felt motivated and natural. I was impressed with how Brochu, alone on the small stage of the Theatre at St. Clement’s, drew me into a world that he created all through the strength of his storytelling."
Read more

"Jim Brochu, who both wrote and performs 'Zero Hour,' seemingly channels the roaring bellowing rhinoceros Sam 'Zero' Mostel...What makes the revival of 'Zero Hour,' beautifully directed by Piper Laurie, so timely for audiences today is the nearly 10 year swatch of time between 1947 and 1956. This is when political repression and government scare tactics spawned a communist witch hunt that destroyed the lives of thousands of individuals."
Read more