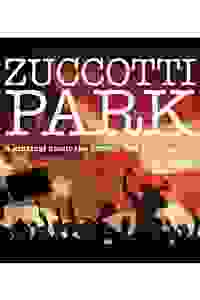 View in admin
ZUCCOTTI PARK, A musical about the human side of economics (FringeNYC)
NYC: Lower E Side
78
Score it Scored!

ZUCCOTTI PARK, A musical about the human side of economics (FringeNYC) NYC Reviews and Tickets

Part of FringeNYC: What does it mean to be an American? After eight years of war, Sergeant Cooper visits childhood sweetheart, Kate, in NYC. They meet at Zuccotti Park, home of Occupy, where she and her friends protest the government he fought for.

FROM THE ARTIST:
“Zuccotti Park” is a musical about the human side of economics. Set at its namesake location in New York City during the Occupy protests of late 2011, the play dramatizes the experiences of a broad cross section of Americans whose lives were impacted by the current economic system. In the play, two soldiers, Cooper and Washington, on leave from Afghanistan, visit New York City. Cooper is an Iowa farm boy and Washington, an African-American, New York City native. Cooper has arranged to meet up with Kate, his high school sweetheart, at Zuccotti Park. But unbeknownst to Cooper, the park is ground zero for the Occupy Movement. He finds Kate just as she is being pepper sprayed for assisting a friend during a police raid. Cooper challenges the police for what he sees as unnecessary force, is handcuffed for his efforts, and ends up in jail with the protesters. Despite their radically different worldviews, Cooper finds he is still attracted to grown-up Kate. After Cooper, Kate and the protesters are bailed out, Cooper accepts Kate’s invitation to spend time with her and her fellow protesters at Zuccotti Park. Throughout the play, Cooper and the audience learn the back-stories of the protesters: a homeless veteran, a family buying their first home, a student who can't find a job among others, as well as the opinions of people who profit from the system. The story comes to a head when the police raid the Occupy camp at Zuccotti Park and dismantle it.

See it if you have a friend involved in the production.

Don't see it if you are looking for good theatre.

See it if You wish to see a big musical in development with social conciousness. Some of the ballads are nice and the children in it are wonderful.

Don't see it if You want a show that doesnt beat a message into you with a one sided political view and a lack of actual perspective.

See it if you are interested in learning about the Occupy Wall Street movement at Zuccotti Park.

Don't see it if If you are expecting a polished performance of a musical that would rival an Off-Broadway production.

"As the theater echoes with Giancarlo de Trizio’s plastic-tub percussion, and dancing, chanting performers beckon us onstage, we feel as though we’ve become part of a lively protest...'Zuccotti Park' maintains this inclusive energy throughout...While the musical tries to clarify some of the issues in which Occupy took root, often via satirical song-and-dance numbers, it is through these personal tales that Zuccotti Park truly shines."
Read more

"A failed attempt to conquer the daunting task of establishing equilibrium between addressing important social issues and formulating a source for song and dance that will provide enjoyable entertainment...The book and lyrics by Catherine Hurd, although still relevant, are old news...The music by Vatrena King is less than pedestrian...At this stage, this production does not provide any insightful ideas nor does it provide enough engaging entertainment."
Read more

"In the spirit of productions like 'Rent' and 'Hair,' 'Zuccotti Park' is a welcome addition to the musical that cares…Wonderfully crafted with soul-stirring numbers, 'Zuccotti Park' electrified the crowd, resonating with the soul of revolution. Brian Kinnard as Tom, a homeless veteran singing 'I’m Your Hero,' has a show stopping number. Director Luis Salgado and the entire ensemble bring justice and fervor to a movement that can no longer be ignored."
Read more