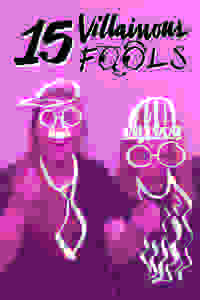 Following a run at FringeNYC 2016, this farcical, two-woman adaptation of Shakespeare's 'The Comedy of Errors' returns to New York City.

Don't see it if don't like something not conventional.

See it if You like really silly version of Shakespeare, want a short, breezy production

“An hour-long rollicking and riotous romp that’ll have you rolling in your seat from beginning to end…The production thrives on their unparalleled chemistry…To boot, they’re hysterical…But the true genius of ‘15 Villainous Fools’ is that...there’s actually quite an important underlying level of poignancy in the way this piece is prepared and presented…More than just a spoof, it’s a work of art… A raucously fun production that hits all the right notes comedically and dramaturgically.”
Read more

"For this highly modern and clever take on Shakespeare’s 'The Comedy of Errors,' the very energetic writers and actors Maggie Seymour and Olivia Atwood have condensed the Bard’s farce to an hour, with time for raps, dance breaks, puppets, Nerf guns and a little audience participation…Seymour and Atwood deftly and hilariously keep the 15 characters straightish...Shakespearean scholar and novice can both enjoy this riotous showcase for two performers with standout comedic timing."
Read more

"Atwood and Seymour attack the exhaustive task of telling the story by themselves with clockwork precision. Synchronous movements, interwoven lines and original raps, and plenty of improvised dialogue show just how well the show has been rehearsed...Whether you know 'Comedy of Errors' or not, you’ll be sure to have a blast with these two wonderful clowns."
Read more

"'15 Villainous Fools' has a winning simplicity...Atwood and Seymour are terrific clowns...and give the old play new immediacy. Okay, some of the stage business does get repetitive at times. But the performers look like they are having such a good time on stage that it really doesn't matter. And no question you'll find yourself pulled into the action and perhaps laughing more than you ever have at all of the tomfoolery in Ephesus."
Read more

“From the opening rap, Seymour and Atwood are non-stop, picking up cues at a master’s pace...‘15 Villainous Fools’ rivals ‘The Complete Works of William Shakespeare (Abridged)’ with apparent ease...Fans of comedic Shakespearean remixes would struggle to find a better example of the genre, but those looking for the fringe of Fringe might see Seymour and Atwood’s obvious talents as wasted on such a typical show.”
Read more

"'The Comedy of Errors' is neither Shakespeare’s most popular play nor his most memorable, but with writing, choreographing, directing, and acting from Maggie Seymour and Olivia Atwood, one can’t help but wonder, why not? The two actresses undertake the task to act as 15 different characters...The comedy is what causes this play to succeed...Seeing the hilarity and chaos that is '15 Villainous Fools' is worth the trip."
Read more