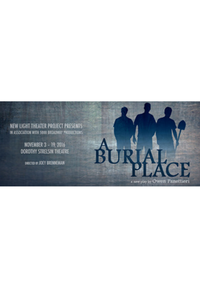 New Light Theater Project presents a new drama about three friends whose college summer vacation is disrupted by a criminal inquiry that threatens to expose one of their own.

Following a rough sophomore year, Emmett, Colby, and Marcus were hoping to reunite for a fun night of beers and laughs at their annual summer sleepover. Instead, they find their hometown at the epicenter of a major police investigation. A gruesome discovery out in the woods where they used to play has resulted in public outrage and a growing list of unanswered questions. What's been found could be connected to an incident involving Marcus from years earlier, but if the boys go in search of the truth, it may pull them apart forever. Some secrets, no matter how far you push them down, never find a place to rest.

See it if You enjoy small stories, casts, and sets. An interesting story told in one small room that holds a lot of memories.

Don't see it if You don't like mysteries that don't get answered, or super wordy plays. This is pure dialogue and no questions get answered.

See it if You want to hang out with three childhood friends as some very interesting thing develop during their annual sleepover.

Don't see it if You do not have an open mind. You are not ready for a left turn during the play that will keep you enthralled and wanting to see how it ends

See it if Three energetic college age guys trying to figure out the seminal event in their lives. The author def knows his subjects, & it's a fun ride

See it if you want some good old fashioned magical realism, with a brief foray into race, peppered into a concoction of millennial era nostalgia.

Don't see it if you have no connections to gaming culture from the past 20 years. Read more

See it if You want to see some good drama, great performances, and a very unusual story line which keeps you absorbed throughout.

Don't see it if You want something splashy, with elaborate sets in a large theater venue. Sometimes simple is better!

See it if you want to go on a journey that takes a left turn half-way through but keeps you enthralled. Theater at its best. A small intimate venue.

Don't see it if you have no imagination, don't like magic realism or small venues

See it if You don't mind seeing small, interesting productions with great acting, and plots that draw you in to them.

Don't see it if You are looking for a bigger scale production with elaborate sets, and don't like small intimate theaters.

"As inexplicable and strange as what happens in Panettieri's new play 'A Burial Place' may seem, there is something so real, so humanly relatable to its ethereal quality that it becomes this heartwarming story...All three actors really bring this bond of friendship to such a fundamental core, that there is little the audience can do but share in the experience, wondering if they could be as strong as these characters are."
Read more

"Panettieri’s script is a master class in building character and drawing out tension. The three performances are superb...Director Brenneman does an exceptional job of creating a casual, natural atmosphere at the beginning of the play, and then, gradually, ramping up the tension until a moment of climax...It’s a play where you don’t know what is ever coming next, but it results in a satisfying conclusion that ruminates on friendship, loss, and growing older and apart."
Read more