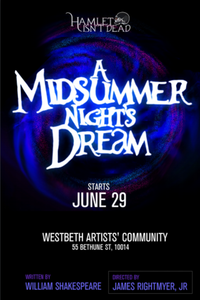 Welcome to Athens, one of the world’s oldest cities! This town has seen countless stories of love and betrayal, but none quite like this one. The tangled knot of four young lovers threatens to unravel a royal wedding. Elsewhere, a band of would-be actors plan to create the greatest show the world has ever seen. They all descend into the forest, but little do they know that it won’t only be filled with mortal beings this night: the faerie king and queen have their own disputes to resolve. Hamlet Isn’t Dead highlights the lightness and musicality of one of Shakespeare’s most beloved comedies with a production featuring harmonic renditions of classic and modern tunes, and an immersive, playful style.

See it if You want to see a Midsummer this season that's light, fun, and intimate.

Don't see it if You're expecting to have your boat rocked, and you can't tolerate millenials singing 60s pop songs anymore.

See it if Great fun! Light and funny