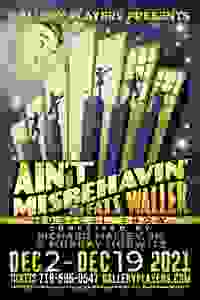 The TONY winning revue paying tribute to Black musicians of the Harlem Renaissance returns to NYC!

A period piece set in 1920s America, Ain't Misbehavin' celebrates the Black musicians who performed in New York nightclubs and grew to notoriety during the Harlem Renaissance, a time of great creativity and passion. The original Broadway production won the 1978 Tony Award for Best New Musical. Tyrone Huntley (The View Upstairs, Jesus Christ Superstar) makes his directorial debut with this exciting revival.

See it if you like Fats Waller's music some of it sung extremely well with nice choreography on a useful set. Alexander Brown is a standout.

Don't see it if you expect perfection-here some voices don't match up with the others, the lighting is stagnant, the costumes range and the props are poor.

See it if you want a good time! It's a concert of glorious jazz songs with some excellent dancing.

Don't see it if you're looking for plots or themes. There are some suggested characters but they are inconsistent.

See it if you enjoy the music of Fats Waller or music of the 1920s-40s, or you're just looking to have a toe-tapping good time.

Don't see it if you don't enjoy musical revues and would prefer a narrative.

See it if You can't beat the brilliant music of the great Fats Waller. Kudos to musical director, Matthew Everingham for making his piano sing!

See it if A for effort. These young people put their heart & soul into this. Songs are wonderful, piano player stellar.

Don't see it if Mediocre voices,songs often not appropriate for individual's ranges. Choreography fun but only one real dancer.One horrendous costume choice

70
Disappointed, Not up to gallery's usual standards, Mediocre

See it if You'd like to visit 1978 Tony winner, in much less professional production. A great male tap dancer & actor, ladies not up to par.

See it if You want to see a amateurish musical. I wanted to like this show but it reminded me of high school. One actor shined , the rest were ok.

Don't see it if Unless you enjoy high school musicals

See it if Like Harlem Renaissance and it music performed by talented people who are very carefully representing Tonny winner of 1978. Mr.Brown-wow!

Don't see it if Expecting a lot of dialogs, super fancy outfits and the Broadway-level production Read more