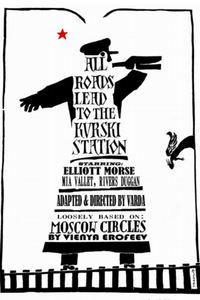 View in admin
All Roads Lead to the Kurski Station
NYC: East Village
Score it Scored!

All Roads Lead to the Kurski Station NYC Reviews and Tickets

(NOTE: This production closed in June.) Based loosely on the novel 'Moscow Circles,' this new drama follows a poet-drunkard called Vienya as he traverses Soviet Moscow in an attempt to catch a train to visit his beloved in the distant suburb of Petuskhi.

Along the way, he is haunted by fantastic visions, and two mysterious women, seemingly determined to frustrate his plans. In the tradition of anti-theater scene of 70s and 80s New York, 'All Roads Lead to the Kurski Station' rejects naturalistic forms of storytelling, and relies instead on the stylistic fusion of European avant-garde theatre, performance art, Dadaist aesthetics, satire, and montage.

“An anti-theater work that aspires to lofty aspirations but ultimately falls flat and seldom delivers...This is postmodern theater. And if that tells us anything, it is that everything and nothing matters...And that’s precisely why the next two hours meant near to nothing...A dizzying affair, one that hardly delivers on the lofty ambitions set from the beginning...Nonetheless...Plays like this are a breath of fresh air for the once-decaying downtown theatre scene.”
Read more