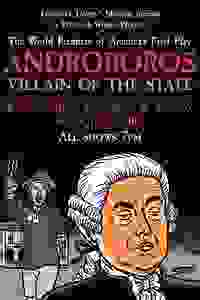 View in admin
Androboros: Villain of the State
NYC: Financial
Score it Scored!

Androboros: Villain of the State NYC Reviews and Tickets

Before Hamilton and Washington, there was Androboros—the villain who tried to end NYC's beginning and failed to make America great. This musical adaptation of America's first play is a comic tale of political gridlock.

Mixing Elizabethan language with the commedia del arte of its day, 'Androboros' will feature over a dozen original songs played live with a dancing, 10-member cast in an intimate setting. Based on a true incident that scandalized the young New York colony, 'Androboros' is a biting critique of early political angst when colonials had little faith in their provisional government.

"Director Ralph Lewis, apparently not trusting the material - or finding the play too dated, has staged a carnival-esque version (adapted by S.M. Dale in June 2016) which includes 16 songs and musical numbers, in addition to making contemporary references to the Trump Administration, as well as current New York City politics. The result, a series of SNL political skits, is neither faithful to the original nor witty for a modern audience, more of a confused jumble than a historical rediscovery."
Read more

“Funny, fast-paced political satire...The adaptation never feels stodgy, but that’s not to say that initially, given the large cast, the rapid-fire dialogue, and the brisk staging that I wasn’t a little confused as to who was who and doing what...Whether you’re a political junkie, love a cutting satire set to music, or have never been to Fraunces Tavern, 'Androboros' is a clever romp through history told with fresh eyes, influenced by current events, in a legendary space.”
Read more

"'Androboros' is a complicated tale...Added to the confusion are the Restoration comedy language and plot twists and turns that are unfamiliar to a modern audience...So even though there is, at several points, a narrator of sorts who speaks in current vernacular, the plot is impossible to grasp in anything other than a general sense...Simply put, the play is a farce – broad and improbable. For farce to succeed you need context and an understanding of what is being lampooned."
Read more

"Androboros: Villain of the State' could be better...For all Peculiar’s noble effort at clarification, the complicated plot just doesn’t have enough of a pay off to be worth the attentiveness required.. Worse, Peculiar promotes Hunter’s play as a 'mix of Elizabethan comedy and Italian Commedia dell’arte,' but if the broad mugging by too many of the dozen cast members represents the epitome of this hybrid genre, I’m relieved this theatrical style has fallen out of favor."
Read more

"Indeed, this play feels strangely timely...A few of the newer bits – clearly added in for this modern adaptation – do almost come off like too much of a forced attempt to draw connections to modern times...Still, this did not greatly detract from the overall experience, and it was still a solid production...The plot and biting political humor of the play remains potent today, and the enormous energy and talent put into this production make it worth checking out, and judging for yourself."
Read more

“A rollicking and bawdy production...A rather convoluted story and the first half may be difficult for today's audiences to follow if they haven’t read the program notes closely...However, in the second and third acts the comedy dials up a notch...It’s a reminder that magic and witchcraft were parts of daily life in old New York...For history lovers, this amusing snapshot of a moment in the city’s history will be ample reason to linger over some libations in the tavern below.”
Read more

“If you are a student of early American drama or fascinated by the real-life drama that was New York in the English colonial era, then this play is for you...An able cast under the direction of Lewis inhabits these roles with glee...The company does a good job keeping the 80-minute play moving at the brisk clip that farce necessitates...While Fraunces Tavern is mostly a 1907 recreation, it is nice to see the work staged in a building that at least has its origins in Hunter's era.”
Read more