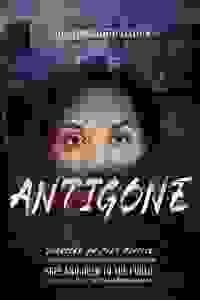 The Classical Theatre of Harlem presents this free, outdoor staging of the classical drama from Sophocles, reset in a dystopian future.

The struggle for power, glory, and the claim to the city of Thebes has shattered the bonds of brotherhood, leaving two men lifeless. The new king proclaims one brother a hero and the other a usurper, leaving his limp body lying in the street as an example to those who dare act against the state. But when the sister of the slain young brothers protests the edict, she breaks faith with everything she has ever known in order to set things right at any cost.

Don't see it if Acting is overwraught (Jones' Creon) or one note (King's Antigone) but its injurious Smart, swift pacing by chorus helps drama stay potent

See it if you like modernized classics made relevant to our times; want to see great young performers in a terrific set

Don't see it if you would be disappointed in that this abbreviated version of a complicated, classic play is only one hour long Read more

"A brisk and very handsome staging...Directed with admirable clarity by Carl Cofield...Devoted to atmospherics, this production prioritizes complexly layered design over dramatic cohesion. Some of the play’s meaning is lost with what this slender, hourlong show leaves out...Yet even with these shortcomings, the ritual of the whole — with the music of a crooning chorus and the movement of a flock of five dancers — does bring catharsis."
Read more

"For all its seriousness of intent, this 'Antigone' is not some grim, eat-your-spinach night at the classics. It is free, an hour long and a summer-evening delight...Director Carl Cofield knows that Sophocles’ intensity will land strangely on our ears, so he sometimes redirects it into humor... Jones is extraordinary...He finds a way to make us spare a thought for Creon, a man trying to rebuild a city from blocks that turn to dust in his hands."
Read more

“A vividly contemporary twist on a Sophoclean tragedy...This production sometimes seems eerily in sync with our strange times...This is an 'Antigone' more rooted in melodrama than tragedy, focusing less on the price she pays with her life and more on the fireworks that occur when the status quo is challenged...This is a tense, involving drama presented with a highly theatrical flourish and with something to say about the debased state of our democracy.”
Read more

"While linking 'Antigone' to movements such as Black Lives Matter might seem slightly tenuous, those echoes of current controversies about police brutality turn the play into a passionate cry for justice...Less successful are a series of Afropunk-style dance interludes that replace the traditional tragic chorus. These numbers are themselves finely choreographed but feel incidental...But Cofield and his cast get the main thing right by making classical tragedy seem fresh and eternal."
Read more

“Familiar images of mourning and protest make clear the relevance and importance of this powerful play...Though the performances are uneven, there are some stellar moments...Inspired by Paul Roche’s adaptation, the added moments of colloquial dialogue connect us to the material (many times with humor) and make the relationships clearer...There is something special about sitting under the stars and sharing an evening of compelling theatre with an energetic, New York audience."
Read more