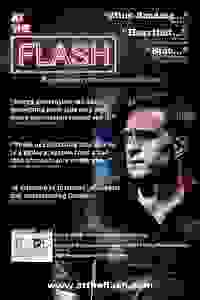 At The Flash (FringeNYC) NYC Reviews and Tickets

Part of FringeNYC: "At The Flash" is a mind-bending, multi-character history of a gay bar seen through the experiences of five specific, yet universal characters whose stories ricochet and collide through a whirlwind of interwoven scenes spanning five eras of gay history.

See it if you enjoy reviewing LGBT life through the ages by checking out various bar patrons and their stories. Excellent depictions of five people.

Don't see it if you are not willing to face some cliched characters who nevertheless inhabit many bars throughout the land.

See it if You like solo shows that are beautifully written and performed; enjoy shows that reflect queer history and pride.

Don't see it if Shows with queer themes aren't your cup of tea (or shot of booze.)

"Leeper’s voice and persona can change on a dime and are on exquisite display when he cycles through all the characters in quick succession during one killer of a monologue...There’s never a moment of unease in the storytelling with his careful guidance...If some, especially those familiar with plays about gay history, might find the script a bit lacking, David Leeper’s performance helps make up for this, and might well be a standout of Fringe."
Read more

"This play is a collection of unaware clichés which only perpetuate the one-dimensional ideas the media usually presents of LGBTQ people. The script is always patting itself on the back for being so pithy, when it’s merely reinforcing notions such as the '80s being all about careless sex, and lesbians falling in love at first sight. It’s good that he transitions so effortlessly from character to character, even as they spew trite lines or T-shirt quotes, because he remains a wonder to behold."
Read more

"The five caricatures brought to life are merely tired, gay stereotypes spouting every imaginable cliché and have no substance or dimension...Mr. Leeper fares much better as an actor than a playwright with an admirable solo performance...Unfortunately, this skilled performer cannot overcome the obstacles in the script he co-wrote. As it stands now, 'At The Flash' is out of date, antiquated in its structure and revelations."
Read more

"Leeper, who plays five characters in a gay bar over five decades in 'At The Flash,' is an impressive mimic...Leeper gives each of his characters a distinctive voice (and some memorable lines), and provides each a different carriage...This shows off Leeper’s skills as a quick-change performer. But it doesn’t mask his limitations as a playwright...These are static sketches rather than a drama about characters who grow or at least change."
Read more

"Though some of the character arcs go on a scene or two too long, Chandler and Leeper offer some stunningly fabulous quotes. As strong as the writing is, 'At the Flash' celebrates an extraordinary performer. David Leeper provided a seamless character exploration. Jumping time and character, Leeper's characterization was near flawless...Chandler and Leeper have written a beautifully rich story that will go down in history."
Read more

"David Leeper's extraordinary talent is on display not only when he embodies each individual character, but also when he rapidly cycles through all the characters in quick succession during one extraordinary monologue near the end of the show…David Leeper gives each of his characters a distinctive voice bringing them to life right before your eyes…’At The Flash’ gives you a glimpse into gay history when gay bars were one of the very few places those who were different could call home."
Read more

"When it is sufficiently insightful and surpassingly proficient, theater has the power to astound us. Such is the case with this one-man show, featuring five characters who were patrons of a gay bar. This is a story worthy of being told. It is theater inits purest form. David Leeper completely and convincingly becomes these characters. He makes us care about them and their concerns, and ultimately,their plights. It is an amazing spectacle, made moving and profound by his perfection and pacing."
Read more

"Under David Zak’s direction, Leeper moves quickly and smoothly between the characters. He’s most effective as the more flamboyant characters of the club kid and the drag queen, and he’s also quite convincing as the closeted, conflicted Richard of the ‘60s. His Mona and Rod are less interesting and need some more detail or rough edges in the writing to give him something to work with as an actor...'At the Flash' succeeds most as an accurate and heartfelt piece of gay history."
Read more

"A kaleidoscopic mosaic requiring Leeper to switch back and forth between characters with often less than a sentence...The vividly etched portraits never disintegrate into caricature, but remain distinct and immediately recognizable...The stories make for an engaging and surprisingly epic narrative, and although none can be said to end happily there is empowerment in surveying the accomplishments of the outsiders who congregated for recreation, but grew to lead a social revolution."
Read more

"Leeper proves himself wonderfully adept at shifting from one character to another, even spanning all five in rapid-fire fashion at a couple points. The closeted ’60s man and the out-and-proud contemporary father are the most well-rounded, but all the characters are recognizable…Leeper and Chandler’s script offers a broad historical survey of the modern gay rights movement, charting progress without tying it all up too neatly."
Read more