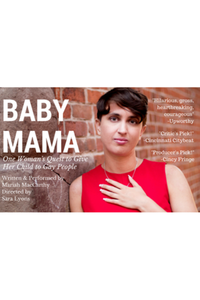 Closed 1h 10m View in admin
Baby Mama: One Woman’s Quest to Give Her Child to Gay People
West Village
84
Buy tickets from $25
Score it Scored!

Baby Mama: One Woman’s Quest to Give Her Child to Gay People NYC Reviews and Tickets

Caps Lock Theatre presents Mariah MacCarthy's autobiographical solo show about her unplanned pregnancy and her efforts to place the child with the gay couple of her dreams.

See it if You are interested in an original, personal, sexy and triumphant story about a difficult choice.

Don't see it if You're a sexist tool, you hate one-man shows, you hate humor, you hate burlesque

"MacCarthy's narration of her life circa 2012 is funny, moving and unapologetically candid, as is her performance. At the same time...I found myself wanting to know more about the people on the fringes of the story...As it is, MacCarthy glosses over moments that seem to warrant more exploration than they're given. Still, 'Baby Mama' is an entertaining slice of biography that offers a thought-provoking (if sometimes myopic) perspective on a kind of motherhood that's not often talked about."
Read more

"The account is funny, sexy, and heartbreaking. MacCarthy is a terrific performer and her honest, direct, and sassy delivery raises important questions about reproductive choice and the ways class impacts everyday life...There is neither self-pity nor resentment in MacCarthy’s delivery. Instead, thanks to Sara Lyons’ excellent direction, MacCarthy’s straightforward storytelling is riveting and easily opens the door to larger political concerns."
Read more

"MacCarthy’s writing style is accessible and poignant…MacCarthy brought immense heart and soul that effortlessly leaped from page to stage…There was a bit of discomfort to start but once she began to live in her story once again, MacCarthy beamed with passion…Director Sara Lyons helped to bring out the humor of the situation while balancing the gravitas…MacCarthy tells a story. Plain and simple. And that’s what made 'Baby Mama' so powerful."
Read more

"The tone of 'Baby Mama' is warm and inviting...Mariah’s script and performance are full of heart and an obvious labor of love. Her story truly stands on its own, and is thankfully uncluttered by theater-y gimmicks…It’s really funny, but never self-effacing. It’s incredibly tender, but she doesn’t gloss over or trivialize the complicated parts…'Baby Mama' also serves as a really interesting first-person retrospective of Mariah’s artistic life during and after her pregnancy."
Read more

"MacCarthy has a breezy, conversational style. It’s almost like you’re a guest at her party, where she holds court telling compelling, honest stories. There’s no pretense. And while there’s obviously a script, you get the sense she’s never tied to it but has the freedom to express herself however she wants...There’s nothing repressed about her sexuality, but more than that, she’s completely vulnerable about her feelings, emotions, successes and failures."
Read more

"This is a life lived to the fullest, with all the small madnesses, hard decisions and certainties of the heart that come with it. Even so, 'Baby Mama' feels a little long...Lending a little more narrative and empathy to those in the circle would give the show some additional depth and dynamic...If you’re coming to the Fringe for a production that demands life on its own difficult and confusing terms, you’ve come to the right church and the right pew."
Read more