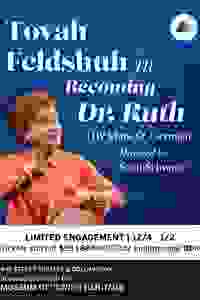 Returning to the stage in New York City is six-time Tony- and Emmy-nominated actor Tovah Feldshuh in a new production presented at the Museum of Jewish Heritage – A Living Memorial to the Holocaust. The one-woman show, written by Mark St. Germain and directed by Bay Street Theater’s Artistic Director Scott Schwartz, chronicles the life of noted psychologist Dr. Ruth Westheimer, from her early years fleeing Nazi Germany, living as an orphan in Switzerland, to her service in the Israeli armed forces as a sharpshooter, and her later life and career in New York.

See it if Tovah is good as Dr Ruth. If you remember early 80s when she was relevant.

Don't see it if Does not go deep enough into her life. Writing is not great.

See it if you know how good Tovah always is & you'd enjoy a look at Dr Ruth's life-the highs and lows, the humor and sadness, with useful projections.

Don't see it if you do not like one person biographical shows, do not appreciate Dr Ruth's contributions to society or are triggered by holocaust stories. Read more

See it if you want to see an amazing and riveting performance by Tovah Feldshuh of the equally amazing life of Dr Ruth. Powerful and often very funny.

Don't see it if you don't like one person shows or talk of the holocaust. Her early life as child was very unpleasant during WWII. Read more

See it if you like one-person shows or if you want to see a masterful interpretation by Tovah Feldshuh. She really is remarkable in this role.

Don't see it if the one-person format doesn't appeal to you. The set-up is rather awkward, as is some of the business of packing. But excellent acting.

See it if you think of Dr Ruth fondly

Don't see it if Great theater. Subject may not interest you.

See it if You want to be entertained and learn a lot of personal and world history all at once, from a masterful one-woman show powerhouse!

Don't see it if You choose to remain ignorant about history and injustice.

See it if You are the least bit curious about who Dr. Ruth really is

Don't see it if You don't like one-actor shows, or are looking for mindless entertainment Read more