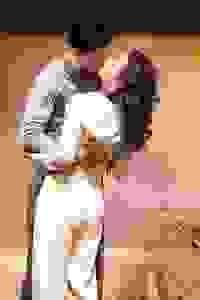 In this new drama, a Pulitzer-winning playwright, screenwriter and outspoken political activist has disappeared from her high-profile life in New York and Hollywood to hide under an assumed name.

While staying at a secluded seaside motel in Santa Barbara, California. she is surprised by an unexpected visit from a man with whom she had a brief relationship 25 years earlier, when she was 36 and at the height of her Broadway fame. He was naïve, 20, and studying to be a Catholic priest. They met during the 1950’s in Reno's famous art-deco Mapes Hotel, where she was staying for her six-weeks divorce, and he was working in the hotel while on sabbatical from the Franciscan Order, struggling to resolve doubts about the priesthood and himself. Over the last 25 years, they have not seen each other nor spoken.

See it if Great acting by ms. Rideout. Great show, great acting and great story. Some good humor. All around well written play.

Don't see it if A sad story about someone dying. A serious drama.

See it if Some stellar acting .Partner's 95 %.My 90%. Fascinating look at stardom, the church and thoughts re: life. Much is done with little.

Don't see it if you must see elaborate spectacles. One oddity.... scenes are in two motel rooms but the walls are bare??

See it if You want to see great acting, very good story.

See it if You like unfulfilled love stories that face moral dilemmas, morality, religion, blacklisting, man & woman from 2 different worlds.

Don't see it if You are sensitive to religious conflicts regarding adultery, celibacy,society’s expectations. Herbal smoking, alcohol consumption. Read more

See it if you like romantic stories which are totally implausible, but which move you nevertheless, even though the plot is somewhat absurd.

Don't see it if you abhor romantic stories which make you groan with disbelief.

See it if You want to see a disappointing mixture of Chekhov and Williams that has a badly handled. Ending.

Don't see it if You’re looking for a happily ever after.

See it if you're interested in a thought-provoking depiction of lost love. Much discussion of religious values. Quite enjoyable, but a bit overlong.

Don't see it if you're uncomfortable with talk of dying, sex, religion.

See it if you want an story that nicely moves from current time to memory scenes. Nice love story.

Don't see it if you can't stand "smoke". Lots of herbal cigarette smoking throughout the show and gets annoying in the small theatre.

“Its maddening structure, extraneous scenes and superfluous characters diminish but do not totally obliterate the potency of playwright Small’s romantic drama...What could have been a focused and poignant work is instead an erratic jumble...With unrewarding tangents...A memory play but poorly executed...The play’s beautifully powerful final moments are marred...as there’s more stage business instead of merely a simple blackout. Luckily two excellent actors play the leading roles."
Read more

“A sumptuous exploration of second chances. It has the rhythm and smell of nostalgia...The characters are meticulously drawn and we fall into their lives like a Saint Bernard on an old sofa –its immensely satisfying and comfortable to experience...Rich, potent text...Strong directorial vision...Complex emotional layering. It is a joy to watch the story unfold...All production elements are artfully executed...Classy, sensory explosion.”
Read more