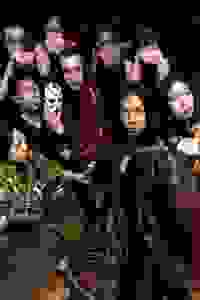 View in admin
Behind the Mask -- a Play
NYC: East Village
62
Score it Scored!

Behind the Mask -- a Play NYC Reviews and Tickets

Yangtze Repertory Theatre presents this play-within-a-play at Theater for the New City, where an ancient myth reveals the secret life of a Chinese theater troupe; performed in Mandarin with English subtitles.

This play-within-a-play takes place in a theater space in China, where a troupe is rehearsing for a story about a Chinese mythical hero, Mei Jian Chi. Tyrant King Chu orders the death of his two master swordsmiths. Their son, Mei, seeking revenge, devises a ploy by offering his own living, but decapitated, head to the King. Fragments of the mythical story are juxtaposed with snippets of the mundane personal follies of the struggling troupe during rehearsal. Through the play, we get to learn about the troupe and the pressures of artistic life in contemporary China.

Don't see it if If you don't like plays

"Director Chongren Fan has created a sweet and gripping piece of theatre with 'Behind the Mask.' Fan’s theatre expertise, being rich in both Western and Eastern training, is obvious. As a navigator of our journey, he made me feel like I had traveled to China, if only for one hour. The young cast is full of heart and vigor onstage."
Read more