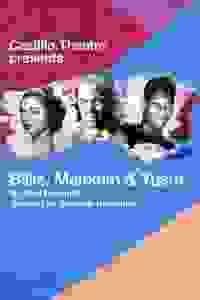 "Billie, Malcolm & Yusuf" opens at a funeral. Among the guests mourning are Malcolm X, Billie Holiday, and a black teenager, Yusuf Hawkins, who was brutally murdered by a white mob in 1989.

As the funeral procession makes its way through the Gates of Heaven, we learn the identity of the “departed,” the conflicts between Billie, Malcolm and Yusuf, and their struggle to live, love and laugh without gods or icons. "Billie, Malcolm, & Yusuf” features songs, humor, powerful reminiscences, historical footage, and more than a few surprises.

See it if You want to see something different. Mostly good...Sometimes great, but with a few major flaws you’re going to have to overlook.

Don't see it if You expect all the “t”’s crossed and the”i”’s dotted. Some weird moments. Some just plain bad moments in an otherwise interesting fun ride. Read more

See it if If you want to see a show about malcolm x or Billie holiday.

Don't see it if Show was disappointing in direction. Acting wasnt bad. Story was so so

See it if you'd enjoy a glimpse of the title characters together offering some of each's story to a new arrival. Mostly effective staging and video.

Don't see it if you are bothered by action from many directions having you craning your neck or do not think some silly should affect the memory of the 3.

See it if If you want to support all the work at the Castillo. The effort's noble, intentions are good, wardrobe is fine.

Don't see it if Hate when 1 singer is way off-key, 1 character is annoying, story is all over the place, piece doesn't know what it wants to be, incoherent.

See it if You want/need an entertaining history and social politics lesson. Very cleverly executed

Don't see it if If political plays that deal with racism are not your cup of tea perhaps you should see this anyway.

Don't see it if Caskets, funerals, or Black deaths are triggering. Play with a few songs. Uneven performances from actors. Read more

See it if You like black history and identify with minorities’ struggles or you are a fan of Malcom X & Billie Holiday.

Don't see it if You want strong story telling and well defined characters or do not care for historical fantasized characters.

See it if Knowing more about Black lives.

Don't see it if If you wear a MEGA hat.

"At a time in which discrimination and violence continue to plague Americans-particularly, African-Americans-'Billie, Malcolm & Yusuf' reminds us that artists' responses to tragedy need not keep audiences steeped in despair. A lighter artistic touch can sometimes engender hope and keep people energized in a way that harrowing dramas cannot."
Read more