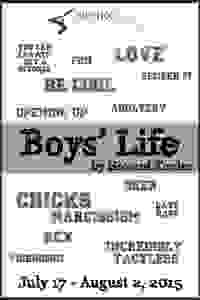 The Seeing Place Theater presents a bitingly funny postmodern comedy of manners that follows the fortunes of a group of urban male "yuppies" as they attempt to come to terms with women and adulthood.

Told in a series of fast-paced, sharply etched scenes, Pulitzer-nominee 'Boy's Life' follows three former college buddies now making their way in the big city, and their misadventures with the many women in their lives. There is Jack, who is married and a father, but not above pursuing adulterous liaisons while babysitting in the park; Phil, who grows weary of not being taken seriously and concludes that being unhappy is the way things are; and Don, who risks a solid relationship with his girlfriend by sleeping with another, just to see if he can. Using humor and wit, the play dissects male narcissism and protracted adolescence, making it clear that it is actually the women who possess the qualities of "manhood" and maturity to which their deluded lovers so desperately lay claim. The show will play in rotating repertory with 'Boy Gets Girl' by Rebecca Gilman.

"'Boys’ Life' tells its story well, but it is trapped within the format of brief scenes that prevent it from digging very deeply into what makes the characters tick. We know very little about Jack, Don, and Phil other than what we can garner from the snapshot glimpses we are given...This is definitely a company to watch."
Read more

"The references are stuck in the time proving the story and characters are sadly dated...This production questions how 'Boys' Life' could have been nominated for a Pulitzer back in the day. The trio of men are despicable characters. The women are so strong that you can't understand what in their right mind would make them want to be with these immature boys."
Read more

"It hasn't aged well and might make more sense as a period piece. It's hard to have sympathy for any of these men who behave in deplorable ways as a means to sex or the women, who let themselves be treated poorly. Sure, people like this still exist, but 'Boys' Life' on its own doesn't say anything that interesting about them."
Read more

"The play unfolds as a series of brief vignettes rather than as a linear story line and is most effective in doing so. After 90 minutes of this, a full picture has emerged, reflecting the playwright’s view of men behaving badly. Despite its being somewhat dated, 'Boy’s Life' is still a thought-provoking and funny play."
Read more