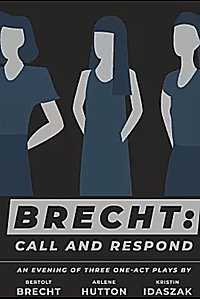 Set in the not-to-distant past, the very present, and the not-far-off future, NLTP's Spotlight Series presents an evening of three one-act plays that blend the human and political. Inspired by Bertolt Brecht’s one act play, The Jewish Wife, commissioned playwrights Arlene Hutton and Kristin Idaszak have written two new one-act plays to accompany, addressing religious persecution, gender and the apocalypse.

See it if Gives you 3 different plots in one story. Makes you think. 1st two better than the thied.

Don't see it if If you dont want to think at the theater. Easier theater to watch is more for you.

See it if you treasure great writing and acting: tops in the Brecht short, great in the second and good in the third. Important messages in brief.

Don't see it if you do not appreciate great staging and costumes, again tops in first piece and great in other two. Third piece wore on me a bit but see it.

See it if Shaken people struggle to find that home & relationships are no longer what they seemed. Excellent writing & acting. Sharply thematic.

Don't see it if You are uninterested in the details of how the characters react, and actors perform, in these mentally disturbing situations. Read more

See it if Identity and persecution past, present, and future. "Let's not talk about misfortune/I will be here undoing/Now only blondes can do that"

Don't see it if Only the restraint of the Brecht play and her controlling her fate wins the night. "I'm not welcome there/And that pronoun thing" Same set. Read more

Don't see it if you fantasize that persecution only occurs in response to legitimate cause. Read more

See it if Three of the best compilation of one act plays anywhere. The Brecht play is masterful. The other two are very well done.

Don't see it if If you are looking for something light, this will not be for you.

Don't see it if you dislike 1 act plays, uneven quality among the 3 plays, somewhat slow portions & comprised of mostly monologues.

See it if You want to see three one act plays in a small theater performed by some great performers. You want to be entertained.

"'The Jewish Wife' is a masterpiece in miniature, a study in quiet, everyday capitulation that couldn't be more relevant than it is right now."
Read more

Score: 80%. "If you have never seen Brecht's The Jewish Wife, which I had not, make this the time you go. It is a poignant story as expected from Brecht. The other two one-acts are intelligent and positioned. The acting is excellent. Worth the ticket price of $25."
Read more

"All three plays have unifying elements involving a female lead…the hold that a romantic partner, husband, or lover has on a woman's psyche and the ways their relationships pull them in and constrain them."
Read more