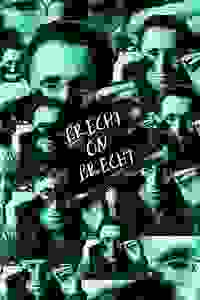 'Brecht on Brecht' celebrates one of the 20th century’s greatest dramatists in a revue of his life’s work. Featuring songs and scenes from Kurt Weill, Hanns Eisler, and Bertolt Brecht’s most famous collaborations, as well as first-hand accounts from Brecht himself, 'Brecht on Brecht' explores the political and social issues the playwright faced as an artist fleeing Nazism for exile in America.

'Brecht on Brecht' will be performed in rotating repertory with ''The Possibilities' and 'The After-Dinner Joke.'

See it if You’re a Brecht fan or if you can appreciate the irony of how the current political climate is so similar to Hitler and the Nazis.

Don't see it if You can’t find the hidden gems buried in a show that is going to be a stretch for the average theatre goer. Read more

See it if you like an intelligent show that uses both the songs and poetry of Brecht to express many of his views. Well cast and effectively staged.

Don't see it if you do not like the music, poetry or views of Brecht even if well done. Read more

Don't see it if Hurt by the fact that despite the high energy of the young ensemble, no one is a capable singer or can deliver the needed political punch

See it if you would like to hear how relevant a famous voice from theater's past can sound in our own dark days.

Don't see it if you are looking for a full play & a revue just won't do. Read more

See it if Passable college production of a monologue, some poems, and a dozen songs by Brecht. Fascistic parallels to today. "Cabaret" via "Godspell."

Don't see it if For fans of The Potomac or The Atlantic Annex (Stage II) only. Favour instead their other far superior Churchill programme running currently

See it if You really know Brecht and would understand any of it.

Don't see it if You don’t know Brecht. You’ll have no idea what’s going on.

Don't see it if Brecht 's songs are so compelling and atmospheric. Makes you wish there was another "Threepenny Opera" coming soon. Well done

See it if want to hear Weill's music. The cast is too young and inexperienced to grasp the subtleties of Brecht.

Don't see it if you're looking for a show with a linear story line This a literary revue with some of Kurt Weill's songs..

“The cast is nimble, bright-eyed, and technically skilled...but their collective pleasant, amiable, and at times positively ingratiating manner seems to emanate from a different universe altogether...It's hard to focus on the words, with all the presentational stage business...‘Brecht on Brecht’ offers many pleasures, as long as you understand that occasionally its acting style is out of sync with its terrible, commanding words.”
Read more

"Perhaps unavoidably, 'Brecht on Brecht' often comes across as a series of highly polished auditions, eliciting the hope that, say, someone will actually cast Bryan and Hamel in a full production of 'The Threepenny Opera.' But it's also a stark reminder that many of Brecht's preoccupations should still be ours."
Read more

"The members of the cast do not trust their material...There is little need for histrionics but an overwhelming need for vocal range, rich modulation, and pristine interpretive style – all oddly missing in the performances...Overall, the young cast seems unable to identify with the depth of despair that defines the fiber of Brecht’s weltanschauung...These are dark times. The center is not holding. Perhaps this is not the time for clowning around."
Read more

"Petosa has assembled a likable cast of four central performers...The cast’s youth and likability, however, are sometimes a detriment to the show. On occasion they minimize the incendiary call-to-arms Brecht’s words can provoke...There are moments of profound insight into Brecht’s approach to theater and the significance of science...As the periodic musical numbers reveal, the piece is at its most successful when it slows down and shines the spotlight on individual performers."
Read more

"A monumental work...An adrenaline fueled musical ride through some of Bertolt Brecht’s most powerful observations on social and political fall out...Every fragment, poem, scene, interruption, song in this 'epic theater' piece goads us into becoming present and engaged...Petosa has injected a heightened pace into the work that feels like the surge of energy felt in a mass protest...The ensemble is riveting...They are so vibrant and insanely talented."
Read more

“Petosa chose to present this piece as Story-Theatre-Meets-'Godspell,' with red noses, zooming shopping carts, and other cheerful accouterments. Much of this direction worked...but it didn't quite fit with the stories being told. Another problem is that some of the performers just aren't up to the high-level singing and acting required...Yet there is much here that is worthwhile...Brecht's writing is razor-sharp, insightful...And the cast does acquit itself well on many pieces."
Read more

“An engaging yet uneven presentation...At times, the show seems overly frenetic with a false frivolity. When the cast enters and tosses their music on the floor and dons clown noses the pace of the show races unnecessarily so. Then, suddenly, the action falls as a more quiet pieces like 'Nanna's Lied/Songs About My Mother,' begin without real transition. The hyperactivity dilutes the fire of Brecht's activism."
Read more

“The performers do not seem to be coming out of deep, radical experience. ‘Brecht On Brecht’ demands a knowledge of harsh life, his canon, as well as the ability to give oneself over completely to the discordant material...The young, well-trained cast...excel most in musicality and they are clear in voice...But the edge is largely missing. No matter the quality of the ensemble...there is a difference between the singer’s voice and an actor’s art—and adapting both...is no small challenge.”
Read more