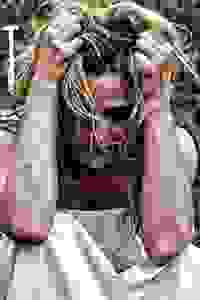 Set in a remote cabin in the wilds of Alaska, this two-person drama finds a snowbound man and woman, struggling to make sense of each other and themselves.

A blizzard rages outside. Henry Harry is jolted awake by the insistent knocking of an unexpected visitor, Rosannah DeLuce, who is fleeing Arizona and her impending marriage. Two wounded, embittered by life, refugees of “civilization” confined to a snowbound cabin, are simultaneously attracted and repelled by each other, as they explore the pain of the past and, in time, consider the possibilities of the present.

85
Magical non-realism?, Mind bending, Great performances, Now where are we?, You were in arizona?

See it if you can go on the ride without needing all the answers to the why, when, where and who, enjoy a mind-bending experience in an intimate space

Don't see it if you must have the answers to all questions posed, two-handers & white out conditions bother you, if U must ask Why didn't she freeze 2 death

See it if Like 2-handers where both have solid acting chops. Although improbable and, at times, overwrought, the play is interesting & compelling.

Don't see it if Are uncomfortable w stretches of silence, plotholes, bouts of histrionics. Script does get repetitive, but builds to a satisfying end. Read more

See it if If you enjoy two very damaged people meeting in unrealistic circumstances that is continuously frustrating.

Don't see it if You’re not looking for HEAVVVY hogwash. N.B. theatre temp makes it feel like Alaska so avoid if you’re feeling fluish.

See it if you enjoy badly written two-characters plays with a storyline so ridiculous that the TV show Scandal wouldn’t even touch it.

Don't see it if if you have ANYTHING better to do than to waste 90 minutes of your time sitting in an uncomfortable seat, feeling trapped and full of regret Read more

See it if When bad writing happens to good actors, the final product is "Brilliant Traces". There is nothing brilliant about this OVER-written play.

Don't see it if This needs MAJOR editing in writing and running time. I was embarrassed for the actors who had to say the certain lines again & again.

See it if You like slow plays trying to be philosophical.

Don't see it if You like quick-paced shows with fun banter.

See it if you want to see a unique and thought-provoking story with great acting--the performances are powerful yet nuanced. The set is fantastic.

See it if you like smart, edgy dialogue from a committed cast.

Don't see it if you're looking for a light-hearted escape.

"Most effective when it allows the characters to interact honestly and without literary pretenses. The setup is intriguing, and the ideas are worthy. Unfortunately, there are a few too many writerly excesses that undermine character development and narrative believability...There are also moments in which the dialogue is a little too overwrought and overwritten. Lyrical allusions to out-of-body experiences, extraterrestrials, and heartbeats are at odds with the plain spoken characters."
Read more

"Persistent psychological drama...The best thing about Johnson's script is its imaginative landscape...So much happens over the 90 minutes. The surprises serve the characters and propel the action...Warr's gone a step above bare-bones actor's theater, to create an artistic landscape...Great movement sequences build toward the brilliantly-staged dramatic ending that rivals any theatrical feat reached in larger scale productions."
Read more

"Fully committed performances...The vacillating and sometimes heavy-handed script is laden with symbols and metaphors. And it is too often weighed down by...frequent passages of unnecessary reiteration, which only serves to slow the pace of the narrative. But director Joshua Warr successfully builds the inherent tension between the two characters...Perhaps the most important lesson of 'Brilliant Traces' is that there is someone for everyone."
Read more