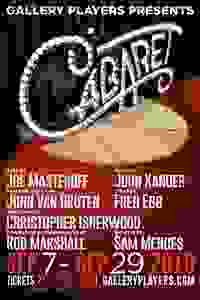 Gallery Players presents a staging of Kander and Ebb's musical classic, which centers around a Berlin nightclub, as the 1920s draw to a close.

In a Berlin nightclub, as the 1920s draw to a close, a garish Master of Ceremonies welcomes the audience and assures them they will forget all their troubles at the Cabaret. With the Emcee’s bawdy songs as wry commentary, Cabaret explores the dark, heady, and tumultuous life of Berlin’s natives and expatriates as Germany slowly yields to the emerging Third Reich. Cliff, a young American writer newly arrived in Berlin, is immediately taken by English singer Sally Bowles. Meanwhile, Fräulein Schneider, proprietor of Cliff and Sally’s boarding house, tentatively begins a romance with Herr Schultz, a mild-mannered fruit seller who happens to be Jewish. Gallery will be producing the 1998 revival script, made famous by Alan Cummings as Emcee.

Don't see it if A lot of skin. Pre Nazi era. if you do not like cabaret or riske production.

See it if you'd enjoy a mostly young cast put tons of energy into a fine production of this musical, with great band, light and choreography support.

See it if Also great set, Great idea for the Cabaret tables. Caught a fantastic talk-back by most of the cast of 19 led by Barrie Gelles MORE

Don't see it if Too many steps to the loo. How will Gallery match this production? Read more

See it if you're a fan of the show. This is a terrific, local production with some wonderful performances, especially Sally and the Emcee.

Don't see it if you're a prude. This is based on Sam Mendes's direction, with lots and lots of skin.

See it if You want a semi-immersive, edgy & fascinating take on the traditional Cabaret. You want a great cast performing a great story & score.

Don't see it if You're bothered by raunchy content. You want a more contemporary musical. You prefer traditional staging. You want bigger production values.

Don't see it if Folding chairs can be uncomfortable. But overall as good or better than most off Broadway shows in Manhattan.