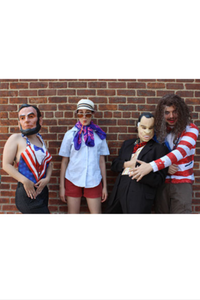 Part of Theater for the New City's Dream Up Festival: At the Bohemian Grove summer camp, the country's most powerful men gather to shrug off the mantle of responsibility, and accidentally summon a demon.

July, 1967, Northern California. A fog of bitter rivalry hangs heavy over the camp. Ronny and Dick are vying against each other for the lead in the 'Our Free World' pageant. PBJ engages in sadistic displays of dominance over his best bud, Hubie. Newspaper magnate Ignatius P. Freeley is collecting enough unpublishable dirt to take down the free world. Meanwhile, Barb drops off her teenage son W to spend some quality time with his grandfather and hopefully soak up a little ambition. But W's accidental summoning of the demon Molochia—combined with the intrusion of a band of hallucinating hippies and a groovy but meddlesome gonzo journalist—threaten to shut the place down. Can the campers forget their differences and band together to defend what's most important: the centralization of American power?