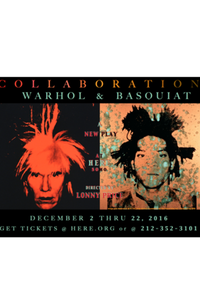 'Collaboration: Warhol & Basquiat' seeks to capture a quintessential moment in New York City’s art-scene history, as Warhol and Basquiat attempt to navigate the perilous terrain of creativity and fame while collaborating on a series of paintings for a gallery exhibition. Directed by Tony-nominated Broadway stalwart Lonny Price.

See it if It was lovely & love street art culture

Don't see it if During lunchtime too crowded