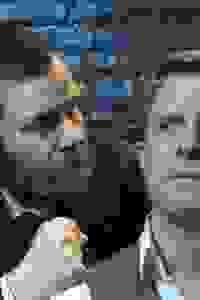 In August Stringberg's drama, a credulous artist has his mind poisoned against his wife by her former husband, during an afternoon in a lounge at a seaside resort. Part of the 2018 Dream Up Festival.

Adolph, a painter-turned-sculptor, is falling under the spell of Gustav, an ill-natured older man whom he has just met. In the guise of friendly male conversation Gustav, Iago-like, makes Adolph dissect his love for his new wife Tekla. She is a novelist whose star is rising while Adolph's falls. We learn that Tekla is Gustav's former wife and she has written about him, characterizing him as an idiot. In an act of revenge, the older man is manipulates the artist to believe that his wife has selfishly robbed him of his creative strength.

See it if you want to see three actors in an old style drama bring about multiple tensions in a one scene play with good sound effects and lighting.

Don't see it if you have hearing difficulty: a cavernous venue where voices bounce around and the soft voice of the actress is lost when not to the audience

See it if you want to see a production of a rarely performed, historically important play by one of the founding figures of modern theater.

Don't see it if theater history doesn't matter enough to you to justify sitting through an inadequate production of a rarely performed classic play . Read more

See it if You want to see a play that was written and takes place 1 million years ago.

See it if you know Strindberg's work and/or this play. Slightly different take here & there, but the psychological mind-F is pretty much intact.

See it if You need to complete your Strindberg list.

Don't see it if Whether it is the play, the translation, the direction or the acting, probably all, every line screamed "inauthentic." I yearned to escape. Read more

See it if You want to be exhausted by the cat and mouse game of romantic love in one of Strindberg's densest and least successful plays.

Don't see it if You want to sit in a cavernous, hot, black box straining to get every tick and twist of plot- could possibly come alive with the right cast. Read more

See it if you were assigned a paper on Strindberg; if you like melodrama; if you're intrigued by 1880s Swedish dramas; if you're a misogynist or incel

Don't see it if you prefer modern plays with believable conflicts & characters you can relate to; if dated (even preposterous) views about marriage irk you Read more

See it if Can't think of why. Weak Strindberg, not saved by the direction and acting. LOTS OF YELLING, for emphasis. Not one credible moment.

Don't see it if you possibly can.

"I was so looking forward to the psychological chess game and deep intrigue of this play and wanted to revel in the one-upmanship, the power shifts and the twists and turns of manipulation. I wanted to delve into open marriage and gender disparity, be turned on by, and feel challenged by the torn curtain reveal of male anxieties. I was hoping for a wild ride through a deadly carnival of human emotion...It didn’t happen."
Read more