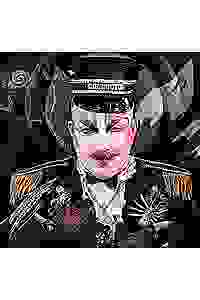 View in admin
Dandy Darkly's All Aboard
NYC: Soho/Tribeca
77
Score it Scored!

Dandy Darkly's All Aboard NYC Reviews and Tickets

American storyteller Dandy Darkly makes his Off-Broadway debut with this hour of sugary sweet satire: a ghost story told by the survivors of that tragic night. Part of Soho Playhouse's Fringe Encore Series.

Preeminent American storyteller Dandy Darkly makes his Off-Broadway debut with his political, hysterical hour of sugary sweet satire. Dandy Darkly's latest is a Georgia ghost story told by the survivors of that tragic Halloween night — from the little boy chased by the phantoms that haunt her as an adult to the cruel Colonel buried in his bunker, tinkering with his toys.

Dandy Darkly's All Aboard! is an uprooting of Deep South shame alongside searing social commentary and Southern Gothic grotesquery: redneck robots, spider gods, beauty shops and inbred redneck freaks. All aboard for Dandy’s most beautifully batshit creation yet.

The show is written and performed by Dandy Darkly and directed by Ian Bjorklund. Dandy Darkly regales his tales alongside a nonstop soundscape of pre-recorded music and eclectic sound effects to create an utterly unique storytelling experience.

See it if Dark US history satire from the viewpoint of a black trans girl in the South. Creative grotesque magical realism with twists. Compelling.

Don't see it if You aren’t interested in an intense solo journey through a weird land of horrors, presented by a conductor clown. A bit loud / over mic’ed.

See it if you would like to spend an hour with an exciting personality who tells wickedly good stories with enthusiasm in great costume and makeup.

Don't see it if you do not like four letter words, stories with sexual content, haunting ghosts and racists or loud shouting at times.

See it if Grotesque whitefaced clown satirically lasers safe America's underbelly of fear of Other with unnerving vocal delivery.

Don't see it if Effective aural cues and story combine to form an hour of smartly-written, aggressively-delivered, panicked indictment of geographical demo.

See it if A series of connected Southern tall tales using the drag king clown motif appeals. You want something you, probably, haven't seen before.

Don't see it if The motif above doesn't appeal to you. You want a more varied tone: the stories, while well-written, are all performed in the same voice... Read more

See it if Storytelling Horror with the Conductor who take you deep down south. This one man show is refreshing and different look at storytelling.

Don't see it if One man show. If you do not like storytelling.

See it if you enjoy storytelling by a strange character with a dark outlook. This one man show is refreshing and different; not for everyone.

Don't see it if you dislike one man shows of any kind; references to sexuality and dark subjects; sometimes over-the-top.

See it if a moving silly fantastical one man show with an eyepopping costume and makeup.

Don't see it if you don't like stories with homosexual themes.

See it if Creative and forceful performance on this solo performance. Topic is worth listening and thoughtful journey for audience.

Don't see it if You might be taken back by the actor using the clown Experience as the delivery tool.