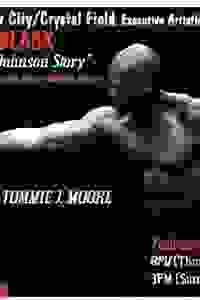 View in admin
Dare to be Black
NYC: East Village
79
Score it Scored!

Dare to be Black NYC Reviews and Tickets

Theater for the New City presents the story of Jack Johnson, exploring the famous boxer's real-life tale of talent, triumph, racism and injustice.

Jack Johnson was an African American before his time. He did things in the late 1800’s through the early 1900’s that some may consider suicidal. Although his physical stature was threatening, his charm and storytelling made him lovable. Jack was the first African-American heavyweight World Champion. And white America could not stand it. After Jack beat dozens of white hopefuls trying to retrieve the so-called white Title, the great white hope era ended when Jack destroyed America’s best, Jim Jeffries. Unable to find anyone to beat him in the ring, the courts charged him with violating the Mann Act, the law that banned interstate and foreign trade of white women for prostitution.

See it if You've an interest in African American history and/or boxing in general. You're a fan of one person shows.

Don't see it if You're looking for a "big" production, or if you must have a fast, tight moving story.

See it if you want to see a play that is absolutely clever, funny, engaging with great acting.