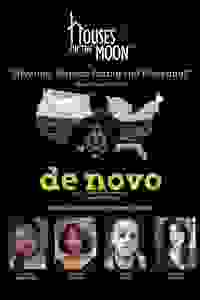 Houses on the Moon's drama tells the true story of a teenaged boy from Guatemala who faced deportation after fleeing to the U.S. to escape gang life. Part of New York Theatre Workshop's 'Next Door at NYTW' series.

At fourteen, Edgar Chocoy fled Guatemala City and traveled over 3,000 miles in search of his mother, who left him when he was a baby to find work in the United States. Detained by the Department of Homeland Security, he pleaded with a Colorado judge not to deport him to Guatemala, where the gang he left had sentenced him to death. 'De Novo' provides a rare glimpse into the life of an 'unaccompanied alien minor' with a documentary play crafted entirely from immigration court transcripts, letters, and extensive interviews.

See it if You want to see one deportation case of a young immigrant’s experience in our justice system acted out.

Don't see it if You want some mindless entertainment or if you don’t like to mix politics with your entertainment.

See it if 2019 version at Kingsborough C.C. Ms Weiner still in the cast Powerful story that has to be told. Catch it when it comes near you. Talkback

Don't see it if Not enough publicity so audience much too light.. 60 minutes.Only one performance.

See it if you're interested in a documentary style play which sadly recounts the struggles of a young asylum seeker and a broken immigration system.

Don't see it if you're looking for something fun and frivolous, or don't want to consider important social and political issues in America. Read more

See it if You appreciate a documentary approach to difficult political situations and have an open mind about immigration and deportation.

Don't see it if You want distance from the performance. Read more

Don't see it if you prefer light fluffy entertainment more than shows that deal with tough issues facing today's world.

See it if you want a front-row seat into the deportation process. It's a heart-breaking story told in a unique way.

Don't see it if you're not open to changing your mind on aggressive deportation policies.

See it if you have an interest in immigration and the justice system.

Don't see it if you're looking for an uplifting story.

See it if you want to see a powerful representation of a true childhood deportation story which gives insight to makes you think about the outcome.

Don't see it if you like light stories, you have a hard time with intensity in intimate settings, you do not enjoy stories/scripts taken from reality.

“A powerful piece of political theater...Deftly directed by Solomon...Those documents make compelling dialogue, rendered tenderly human...The play re-argues Edgar’s deportation case, and in its tragedy demands that we consider who’s allowed to make a home in this country free of intimidation, and who we as a society are willing to fight for rather than against.”
Read more

"Compassionately delivered by a nimble ensemble...Houses on the Moon bravely chooses a case guaranteed to evoke ambivalence...Solomon stages Edgar's complex story with efficient theatricality...One need not embellish to convey just how heartbreaking these cases are, and Houses on the Moon never does. By delivering a clear-eyed yet still deeply moving presentation of just one, the company proves that it takes a certain amount of willful ignorance to see these kids as just statistics."
Read more

“Under Solomon's direction, this true tale of our times is given an unsensational presentation that, at first, seems a little dry but gradually gains force as Edgar progresses through the stages of his personal hell. The four-person cast underplays skillfully, aware that the facts of the story provide all the drama that is needed...Watching ‘De Novo’ is a very sad experience; be prepared for it to haunt you for days after you've seen it.”
Read more

“Heart-wrenching and important...I cannot begin to say how thoroughly good the ensemble is...They are what makes this show so powerful and enjoyable...If there is any critique to level at ‘De Novo,’ it is that this is not a story that is particularly unpredictable...That takes away from the ability to feel true shock. But this predictability only adds to the beautiful difficulty of watching this true story unfold...It successfully humanizes a very big problem...It inspires.”
Read more

"A Magnificently talented group of actors...With the use of screens and projections, Jeffrey Solomon’s direction is savvy and compassionate...Houses on the Moon Theater Company and its members have raised their voices in dissent. They have resisted tyranny and bureaucracy and you can too by bearing witness to this devastating and miraculous play."
Read more

“’De Novo’ seeks to shed light on the 1.1 million undocumented minors in this country, by using this story to add heart...The cast is excellent, the play well directed and superbly done. Ureña as Edgar makes us feel for him...The rest of the cast play multiple roles and are adept at creating realistic characters, thanks to playwright and director Solomon."
Read more

"It’s certain to raise the emotional temperature of any viewer, regardless of their political orientation or current stance on immigration...In keeping with the tone of the presentation, the acting is understated. Nobody overplays their hand or hogs the spotlight here...Directed by Solomon, it’s not light entertainment, an escape from reality, and offers no quick-fix to the immigration problem. Still, it does resonate with what we see and hear in the media everyday."
Read more

“Whether the potential for highs and lows are neutered intentionally because the production is based on dry documentary evidence is uncertain, but the drama is delivered and received with limited emotional range. The slideshow of actual footage throughout the production is powerful punctuation...It can feel like an imposition of political persuasion, and might not be for everyone...'De Novo' would benefit from a wider reach and, perhaps, some agitation."
Read more