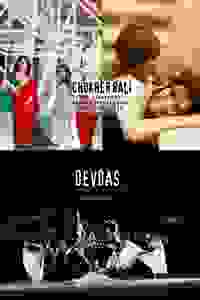 Hypokrit presents a pair of reimagined Indian classics: ancient love story 'Devdas,' and 'Chokher Bali,' an examination of the lives of widows in 20th-century Calcutta.

Reset in India’s hyper-competitive and hyper-masculine reality dance competition scene, 'Devdas' features two female rivals who covet both the main prize and the same man. Usually told from the man's point of view, this version unfolds through the women's eyes in a ballet set in modern India.

'Chokher Bali' is about a widow named Binodini who finds herself entangled in a forbidden love triangle. Adapted by Dr. Partha Chatterjee from Rabindranath Tagore’s novel, this story about female desire in the domestic sphere is adapted as a Greek tragedy set in the modern world.

See it if you have never seen Indian dance. Both companies have talented performers.

Don't see it if you need to understand what is happening as opposed to enjoying the performance. They assume audiences know the stories they are presenting.

See it if you have a strong connection to Indian cultures and want to see family dynamics played out. Good concept but poor execution.

See it if You know someone in the cast. It was presumed that I did (otherwise why would I have been there?). Good concept, poor execution.

Don't see it if You like top drawer Indian dance, classical or contemporary. The city is full of extraordinary performances, many highly recommended. Read more

Don't see it if you want great writing, acting (fairly uneven) or expect the plots to make much sense. Devdas has great dancing that may be worth seeing

50
Great dancing devdos, much to be desired in chokher

See it if you enjoy dance you'll like Devdas. Too bad they are paired - by itself it deserves a higher score

Don't see it if If you want to see the worst of Bollywood with such bad casting that two performers take down the whole experience.

See it if You like Indian plays that are not fast paced. You are into dancing and like such interactions.

See it if if you have relatives performing in the show and you can't come up with an excuse not to go watch them.

Don't see it if you don't like an agonizingly long (at 80 minutes for Devdas!), amateurish and very poorly executed dance performance. Simply awful. Read more

See it if You want to see a reimagining of two classic Indian tales. I didn't know the stories, so found them hard to follow.

Don't see it if You want a clear, concise story line. The actors' hard work was evident, but it was confusing.

"A creative weaving of a traditional story with modern music that truly succeeds in showing that tradition does not have an expiration date. 'Choker Bali' takes on the daring task of bringing traditional Indian customs together with modern culture and female sexuality, through the medium of Greek tragedy...Each character gets a spectacular solo moment of vulnerability that shows the deep pain common to all members of this love triangle, giving new life to this popular story line."
Read more

"'Devdas' tells a story of heartbreak and triumph through the medium of contemporary ballet while celebrating Indian culture...Though the ensemble pieces are mesmerizing, Badghi and Madiraju’s chemistry shines through it all...'Devdas' does an excellent job of blending classic tradition with a familiar reality-show format, which not only gives the female characters a larger role in the story, but also succeeds in keeping modern audiences invested."
Read more

"'Devdas': The director, Arpita Mukherjee, did a nice job telling the story...The choreographer, Swarali Karulkar, undoubtedly has a vast knowledge of dance, but the dancers were not as skilled in making her movements come to life...'Chokher Bali': There were too many actors with nothing to do on stage...There was not enough weight given to any choice made by the actors, nothing surprised their character."
Read more