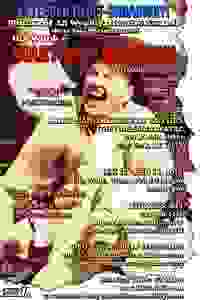 View in admin
Diary of a Madman
NYC: Midtown W
76
Score it Scored!

Diary of a Madman NYC Reviews and Tickets

After a successful run last fall, this solo adaptation of Nikolai Gogol's short story chronicling an average man's doomed quest for individuality in a seemingly indifferent city extends to an Off Broadway run,

Only in his madness does the lowly anti-hero attain greatness! 'Diary of a Madman' centers on Poprishchin, a low-ranking civil servant who yearns to be noticed by the beautiful daughter of a senior official, with whom he has fallen in love. His diary records his gradual slide into insanity.

See it if Even as the protagonist descends into madness, there is something relatable and uplifting about him. Why did I leave smiling? Superb acting.

Don't see it if You don’t like solo plays. You want more narrative than a single character’s loss of sanity. You don’t want to be moved in an unlikely way.

See it if you would like to see a convincing portrayal of a petty functionary's descent into total madness.

Don't see it if you're craving light fare. Gogol was a farceur, but this adaptation, with its convincing portrayal of a descent into madness, is very heavy. Read more

See it if love a rarely done show. So much better than then book

Don't see it if you need a musical or fluffy comedy

See it if You have an interest in 19th century Russian drama. You want to see an excellent performer. You like intense dramas.

Don't see it if You want a contemporary story. You want a story with a traditional narrative thread: it is a madman's diary, so it's confusing & unfocused.

See it if The acting is very good, Russian Play Drama. The story/play is confusing and all over the place in thought. Its about a man going crazy.

Don't see it if He plays the part excellent that seeing someone going thru crazy/mad may be hard to watch.

See it if You are interested in stories about mentally ill characters and enjoy piecing the story together.

Don't see it if You prefer sequential and logical stories and do not like over-acted dementia.

See it if You'd like a taste of Russian playwriting and/or Gogol, or want to see an actor give everything he's got in 80 minutes. He really delivers.

Don't see it if Madness expressed in a small claustrophobic atmosphere is not easy for you to take, or if the non-uplifting Russian style is not your thing. Read more

"Cool sound effects and inventive direction cannot compensate for the overwrought performance in this wearying solo play...Volok is quite personable and definitely commands the stage; his performance is heroic but it is so intense and his accent is often intrusive. Comical and sensitive portions are overshadowed by the perpetual ranting...Technically accomplished, Lazarev and Volok's adaptation is faithful to Gogol's tone but is diminished by Volok's misdirected performance."
Read more

"Throughout the brilliant painting that is Volok’s performance, every twitch of his face, every jerk of a limb, is another artfully placed brushstroke on the captivating emotional landscape of Poprischin...Volok is particularly engrossing to watch in the moments in which madness utterly consumes Poprischin...In addition to being a powerful and entertaining piece of art, 'Diary of a Madman' is a profound commentary on mental illness, homelessness, and empathy."
Read more

"A triumph of acting...A performance of beauty and intensity...Volok is not alone on stage. The madness itself is tangible. The people, the dogs, all present. That is the strength of his performance. Mr. Volok is truth...I wish the production trusted him more. I wish they had seen that Gogol’s story and Volok’s performance are enough, so that they would not need to add so many sound and lighting cues that are distracting at best and absolutely overpowering at worst."
Read more

"A particularly fine visual and theatrical experience...This adaptation of the original story is very well-written, and is delivered with an energy that vividly displays the dark, psychological troubles of this character...The main highlight of this production is the performance of Volok...He is very clearly immersed in the character and keeps the audience captivated and entertained...Won’t leave you bored for a second."
Read more

“Merely the most charming trace of Volok's native tongue, Russian, can be detected. What is far more prevalent is his unmistakably Russian soul, which is not dead in the least, but in the guise of the character and narrator of this piece, Poprishin, terribly damaged...Volok’s commitment to his character is unimpeachable. Every glance, movement, sound, word, laugh, and cry of his severely troubled tale is rendered with palpable pain as well as the innocence of truth."
Read more

“The journey of the show reveals the sanity within insanity and the power and fragility of the mind in solitude...Ilia Volok did not disappoint...There were initial moments when lighting flickered and sound effects sounded all-too-canned. When these aspects aligned, the experience was electric...Audiences eager to marvel at the mind and chuckle at the fervent and heartbreaking ingenuity of Ilia Volok’s performance should catch this show.”
Read more

"The original translation feels crisper and more contemporary than ubiquitous public domain versions. It’s particularly effective in evoking the Gogol story’s vivid mix of the comic and horrific...But the fact that Poprishchin’s madness is obvious from the outset leaves Volok nowhere to go except the no man’s land of over-the-top, actorly clichés of madness, and a tendency to embellish lines with pregnant dramatic pauses makes the piece slower going than it needs to be."
Read more

"Gogol's short-prose masterpiece about a petty bureaucrat's dizzying plunge into the lowest depths of madness isn't exactly the stage-friendliest of texts. Which makes Volok's fevered and fascinating one-man turn all the more remarkable...Volok delineates the delirium with a fierce yet finely modulated intensity, while Lazarev's use of costuming to visually underscore Poprishchin's unraveling mind is a grace note to his otherwise spare but engaging production."
Read more

"Gogol created a character who is a mixture of rationality and madness, a twisted, tormented soul who is also capable of moments of lucidity and understanding. The interweaving of humor, anger, hatred and delusions of grandeur gives the monologue its dense, complex texture -- and makes it a fiendishly difficult challenge for an actor. Volok rises to the occasion; he gives a powerful and commanding performance that this reviewer will long remember."
Read more

"This one-actor play is performed with consummate skill and precision by Ilia Volok, an amazingly talented actor...His rendering of the character of Poprishchin, the titular Madman, is at once both touching and frightening...The direction of the play is simple, elegant, and inspired. Volok and Lazarav don’t make any attempt to elicit sentimental sympathy while still allowing us to feel sorry for the man himself. This is a tightrope act that comes off beautifully.”
Read more

"A bold and unique actor’s showcase, and a performance well worth attending...The story presents pleasantly timeless and universal themes that seem to tie a thread through time...The staging seems at times obtuse and often does not suit the space...All of this is surmounted by the tour de force performance by Volok...The strong script and commonality of the feelings it conveys lay the groundwork for effective storytelling...Succeeds primarily due to Volok’s fully-committed performance."
Read more

"One sees the character Volok portrays morph into a doomed man trapped inside of his forced quarters; A lost soul that sheds into utter madness, making a point of what he is but far from being real...This presentation packs more intense spoken and physical drama than similar stage outings that can last for two or even three acts! Volok’s performance is extremely robust, having its audience hold the desire for more...For a single person showcase, it doesn’t get any better that this!"
Read more