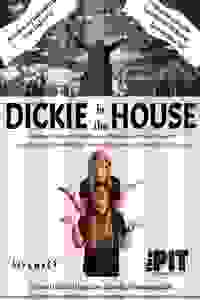 View in admin
Dickie in the House
NYC: Chelsea
70
Score it Scored!

Dickie in the House NYC Reviews and Tickets

Based off of the 5 things they think they know about the Watergate debacle, this wacky play attempts to retell the story of this Great American Scandal. Armed with their joint ignorance, original musical numbers, and plenty of costume changes, these ladies are here to educate you, sort of.

See it if A spoof on Watergate as told by 2 actresses who CV clearly are h as bing a great time on stage. Millennial history.

Don't see it if If you dont like comedy or spoof. Something more serious.

Don't see it if you like your theater serious. There are no clever new insights into Watergate her, just a massive load of giggles.

See it if Watergate told in a very funny and laughed a lot watching this silly comedy.

Don't see it if you want serious play, and not a fan of comedy.

See it if You want a history-inspired sketch comedy in the vein of "Drunk History". You enjoy slapstick comedy. You like creative staging.

Don't see it if You prefer historical accuracy & a more serious tone. You don't like broad comedy. You prefer shows w/bigger production values.

See it if Illegal, immoral, and unintelligent behavior in the Whitehouse that might have occurred but didn't.

Don't see it if You really want to know what happened that caused Nixon to resign.

See it if You enjoy Drunk History and other silly historical pieces. You want to feel like a kid for an hour and a half.

Don't see it if You are looking for a piece that is solidly developed. Dislike humor that is rooted more in character work than in the writing. Read more

See it if you want to see some smart female comediennes straight out of college experimenting with the art form of comedy.

Don't see it if you are annoyed by confusing and messy plots, where there is no focus and constant narrative and cheaters changes, and virtually no sets.

See it if you enjoy silly youthful high-energy off-the-wall humor. Ambitious book (the premise has much potential), but just doesn't quite get there.

Don't see it if you prefer something more solid, structured & set-in-stone, plus you can't handle off-key singing. Tons of flubs lead to non-funny ad-libs. Read more