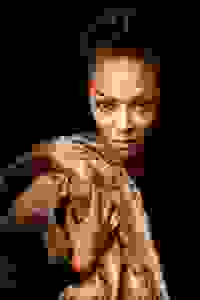 View in admin
Down to Eartha
NYC: East Village
84
Score it Scored!

Down to Eartha NYC Reviews and Tickets

In one act filled with drama and music, this new solo play explores the life of actor and activist Eartha Kitt.

In 1968 while at the height of her career as a world renowned entertainer, Eartha Kitt was also working as one of the main lobbyist for a group of young activists called the Rebels With A Cause. During this time, Miss Kitt was then invited to the White House by Lady Bird Johnson to partake in a womens luncheon to discuss the issue of the rising crime rates in America. At the luncheon however, when Eartha stood up and expressed her views, stating that the increase in crime was mostly due to Americas involvement in the Vietnam War, Lady Bird Johnson was personally insulted by the comment and shortly after, by order of President Lyndon Johnson, Eartha Kitt was blacklisted from work in the United States for the following 10 years! DOWN TO EARTHA is a one woman show written and performed by Dierdra McDowell, and directed by Marishka S. Phillips. In one act filled with drama and music, this play explores Eartha Kitts personal re-encounter of that fateful day in detail. It also delves into her personal journey back to her power and freedom. Stemming from a life ridden with years of child abuse, Earthas personal journey proves to be at times a nightmare of a hurdle! It is one that could only be conquered by the power of love.

See it if Great acting In this one

Don't see it if A solo 1 hour long

See it if Expertly crafted character biography. Transported me to the 60’s from a different perspective. Impressive showmanship.

Don't see it if You aren’t interested in a nonfiction portrayal of a single person, supplemented with film footage.

See it if you want to know more about Eartha Kitt. During and After the lunch at the White House date 1968 what happen.

See it if into key moments in an icon's life.

Don't see it if well - this has some issues. Read more

See it if It’s a fun enough show

See it if So informative! I learned things i did not know about eartha kitt

Don't see it if I left wanting more

See it if Great show