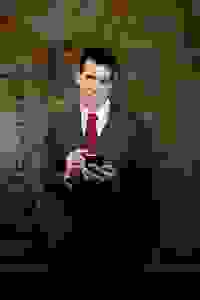 Hunger & Thirst Theatre brings the infamous villain of Gothic literature into the 21st century with its new take on Bram Stoker's haunting novel.

Curious about how far humanity has progressed, Count Dracula ventures to contemporary America to expand his territory and conquer the modern-day female. Using their wits, whatever courage they have left, and, of course, their smartphones, a band of friends do their best to take down the Master himself. Along the way, they learn about the monsters lurking in all of us. Snag half-price tickets by donating blood to the New York Blood Center (really!).

See it if If you like "B" movies. Well enough written and acted to be a couple of notches above average.

Don't see it if You're too cool for seasonal offerings

See it if You would like to see Dracula transported to the US as a modern-day suave seducer of women.

Don't see it if You have no interest in the Dracula story or vampire lore. Read more

See it if If you want a show to get you in the Halloween spirit!

Don't see it if If you are not a fan of the whole vampire genre!

See it if You are a vampire lover with a modern twist.

Don't see it if You can't buy into moderns, suave and charming vampires.

See it if You are into gothic romance

Don't see it if You prefer the classic tale as is

See it if well this show played a year ago but I would say see it if you are interested in a Dracula with a focus on the modern female.

See it if you enjoyed the book.

Don't see it if you are looking for something more entertaining and fast paced.

See it if you don't mind the same old story

Don't see it if if you do mind.

"Pacing wise, the production is a bit slow. It takes a decent amount of time for the plot to truly kick off and the action to ramp up, although the exposition itself is enjoyable...This ending doesn't show a rather crucial scene and feels somewhat unsatisfying after becoming so deeply engaged in the story...Overall, while the play’s structure itself is somewhat flawed, the great performance work and sultry-scary mood make this piece a good Halloween season date night thrill."
Read more

"Camp mingled with straight storytelling...The script and the direction do a good job of keeping us engaged between surprises. Quick pacing, short scenes, and clever, cinematic staging help keep things interesting. We don’t come to care a whole lot about these characters...But sympathetic characters aren’t usually the point of old-fashioned horror stories, and though it’s filled with smartphones and laptops, this ghoulish tale retains a 19th-century ring. To its benefit."
Read more