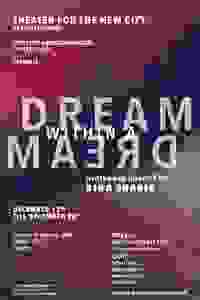 Dream Within a Dream NYC Reviews and Tickets

Bina Sharif's new work is a satirical comedy about theater and the art of putting on a play.

In "Dream Within a Dream" there is a play within a play – where immigrants who usually work as busboys, cleaning ladies, and nannies, wish to be in show business as actors, dancers, and writers. They are trying to put on a play with great difficulties. A Broadway critic shows up and trashes this abstraction of a play. The critic is interested in only one subject matter at this moment and that is hatred of Trump. He is bored by watching this play and dozes off and has his own dream. He is dreaming that President Trump has been impeached. There is a victory party going on, and people are dancing all over the place. He invites the actors to the party for champagne.

See it if you want to see/support the latest play by celebrated Pakistani-American writer/director/actress Bina Sharif; you like meta theatre.

Don't see it if you value your time. [Sharif tries too hard to be Beckett or Ionesco & in vain to be ironic, having a critic ridicule the play w/in a play.] Read more

See it if you like non-traditional theatre, interpreting disjointed soliloquies & story lines, criticism of Pres. Trump and good acting.