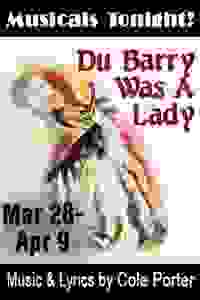 Du Barry Was a Lady NYC Reviews and Tickets

Musicals Tonight! revives Cole Porter's 1939 tuner about a washroom attendant who dreams he is King Louis XV of France. Classic songs include 'Friendship,' 'Well, Did You Evah!,' and 'Katie Went to Haiti.'

Washroom attendant Louis Blore wins a sweepstakes and quits his job. He is in love with nightclub singer May Daly, but she only has eyes for Alex Barton. Louis' friend Charley suggests he slip Alex a Mickey Finn so Louis can put the moves on May. But while trying to do so, Louis inadvertently downs the drugged drink, falls asleep, and dreams he is King Louis XV of France with May as Madame du Barry. Hilarious, song-filled complications ensue.

75
This troupe does so much with so little

See it if you enjoy little-seen shows by great writers. The plot is nonsensical, but the songs are swell, the staging clever, the performers talented.

Don't see it if you need high prodn values.This is just a piano, makeshift costumes, a modest set.But I had, as always, a great time. And the price is right

See it if you enjoy a poor plot, a dated show and very few decent songs. There are only 2 or 3 good lyrics.Disappointing Cole Porter show.

Don't see it if you enjoy a good musical.

See it if you realize this may be your last chance to see this Porter show. It's silly, with a plot that's almost incomprehensible. So what! It's fun!

Don't see it if you have no interest in or patience for old musicals for which adjectives like zany could apply.

See it if you like old time musical comedies, Cole Porter's musicals and songs--though Du Barry is far from his best. Singing was excellent.

Don't see it if you don't like musical theatre or silly plots; dislike Cole Porter; want to see fully staged productions--costumes good, set not so much.

See it if you want to see a classic show with a brilliant score done very well. My favorite of theirs this season.

Don't see it if you don't want to hear a great score with great lyrics. Or want to see HAMILTON.

See it if You want a delightful Cole Porter musical, played as a farce for maximum laughs, with a terrific cast hamming it up.

Don't see it if You want something serious, or don't have the patience for a very thin plot that's really window dressing for songs and jokes.

See it if You like a good old fashioned musical that's rarely performed.

Don't see it if Don't like old fashioned shows or shows without a lot of memorable songs.

"Musicals Tonight!'s revival of 'Du Barry Was a Lady' reveals that even a Cole Porter score cannot save a weak book. A show this thin needs a much more stylish and lavish production to give it the pizzazz that it is sorely missing."
Read more

"The book is sheer ba-dump-dump pastiche...A contemporary production of 'Du Barry' depends on its director and performers to make froth sit well...While a little wink-wink mugging may fly, this particular version, particularly its foray into ersatz history, is self-consciously broad to the extreme. Still, the piece has its rewards...Evan Pappas’s choreography is lively and cute with subtle awareness of limited space...Vocal arrangements are very fine."
Read more