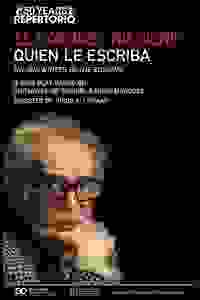 (On hiatus until Repertorio Español presents this dramatization of a novel by Gabriel Garcia Marquez about a retired colonel whose pension, delayed 15 years by an overwhelming bureaucracy, becomes an obsession.

Reduced to penury despite his veteran status, the protagonist and his wife live in anticipation of his pay. But every Friday the mail launch, the only apparent contact with the outside world, comes and goes with the same declaration from the postmaster, “Nothing for the colonel. No one writes to the colonel.” Presented in Spanish, with visual captions in English.

See it if If you like an even paced story that can lull you a little. Good acting, staging and direction.

Don't see it if If subtitles are not your thing. If you need a fast paced play in a big theater.

See it if you enjoy a great story, wonderfully paced, with great acting on a very untrusting set that grabs you fro the start and holds you to the end

Don't see it if you want a lot of fast action and are not patient with a leisurely paced story. You don't understand Spanish and don't like supertitles.

See it if you want to see a story with so much subtext that it could be its own play. With such a great writer, you can't go wrong. Go rooster!

Don't see it if you want a fast-paced, plot-heavy story. These characters are "stuck" in more than one sense.

Don't see it if uninterested in play in Spanish with subtitles. Read more

See it if you are interested in productions in foreign languages. You don’t mind a slow yet atmospheric storytelling with little to no action.

Don't see it if you prefer fast paced shows. You are bored by little to no action on stage. You don’t like small-budget, intimate venues.

See it if you enjoy meaningful foreign stories or drama, especially when based on a great writer's work

Don't see it if you want fluff

See it if You enjoy political themes. Garcia marqués’ writing. The symbolism of his work and great acting . you know Spanish or don’t mind subtitles.

Don't see it if The policial thematic doesn’t interest you. Garcia Marques is Too complicated Can’t understand Spanish or hates sub titles.

See it if you want to see Gabriel García Márquez's favorite novel come alive by a wonderful cast of Spanish speaking actors, with beautiful images.

Don't see it if you're looking for a light entertainment. Although there are fun moments in the play, it is a drama.

"The grandest presence onstage belongs to the smallest creature...a handsome rooster with a strikingly comfortable rapport with his principal scene partner...Intimate, transporting production...Jaramillo is a lovely, likable colonel...Playing opposite a chicken, he is an unflappable pleasure to watch...A solid production, whose design makes watching it feel like stepping into the pages of Márquez...A welcome immersion into another culture."
Read more

"A lovely adaptation of a lesser-known (but not lesser) work by Gabriel García Márquez...Triana’s production does a solid job of translating the necessary García Márquez-ness to the stage...More than just a gimmick, this insistence on Spanish is crucial to establishing the world of the play, especially when that world comes from García Márquez...'El Coronel No Tiene Quien le Escriba' is a great reason to check out Repertorio Español, especially if you’re never been."
Read more

"Viewing the dialogue this way is not distracting in the least...It made me aware once again of how much of a play is communicated non-verbally through gestures, facial expressions and situations...The play is true to the novella, breathing life and putting color into the action and the moods on the page...If you have never read Gabriel Garcia Marquez, this play is a faithful, excellent introduction to the writings of a great author...If you are a fan, you won’t be disappointed."
Read more

"This is a drama in which the principal characters are largely inactive and very little happens...Under Mr. Triana’s direction, the fine cast manages to animate Gárcia Márquez’s absurdist tale with a sense of psychological momentum and narrative urgency. Jaramillo is believably bewildered as the unworldly colonel...As the wife, encumbered by illness, age, and the frustration of her husband’s inaction, Clares is at once strident and sympathetic."
Read more

"El Repertorio Español has concerted this classic tale into a play that proves why it had Marquez’s favor...Deeply impactful. Finally, a play has premiered to show to difficulties of keeping your heart when you can barely keep a dime...An exceptional cast that surround Caramillo’s Coronel like planets orbiting the sun...'El Coronel No Tiene Quien Le Escriba' shows you that if your suffering is for long then make your laughs and loves even longer."
Read more

"A stunning production...Reflects Marquez's penchant for poignancy and poetry...Ability to entertain while drawing attention to the darker and less joyful aspects of our world...A magical show...The whole production is grounded in reality yet imaginative and on the whole is captivating...The actors portray vibrant, sensational characters that we all can relate to...The surprise of the whole performance is Horatius...He is beautiful and so incredibly cooperative throughout the entire production."
Read more

"Every actor gives enthusiastic performances, which ignite the stage and the audience with a vibrant energy...The true scene stealer has to be the live rooster...Certain elements of the plot and dialogue echo absurdist theater...Those without an already existing appreciation for the style, the show's flow could prove confusing...Márquez's poetic style falters a little when adapted for the stage...A few key lines struggle to resonate clearly with the audience...Feels slightly outdated."
Read more