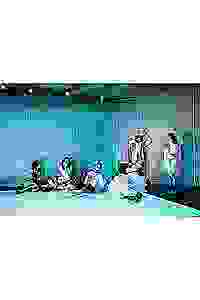 The construct of this newly devised work is allegorical, referencing the gringo invasion of Ramos’s native land. El pueblo de los Olvidados, Parte II explores themes of colonization, its power, and the rampant abuse of it.

El pueblo de los Olvidados, Parte II (The Village of the Forgotten, Part II) is a dance-theater performance in the genre of science-fiction, prompted by Ramos’s research about Puerto Rico in the wake of Hurricane Maria. The narrative concerns the protagonist, Tony Tacón, returning to his native planet to discover the metamorphosis of the land and its gender, attacked and altered by a different breed. As if under a moribund spell, the entire country appears devastated after years of suffering under the colonization by the alien species, GREENGOO. Unbeknownst to the native population, the purpose of this invasion is transforming the nation into an intergalactic tropical resort for alien investors while making it inaccessible to the natives. GREENGOO’s efforts further complicate matters as they plant invasive species to take over the nation by destroying its natural habitat. The infusion of alien flora and fauna gives rise to a new, diverse, trans-sexual species with multiple mammary and sexual organs.

Seeing his nation under this capitalist veil and contemplating the revolutionary potential of this new native breed, Tony Tacón works to come up with a way of awaking the consciousness of the newly created species. Magic herbs bouquets, exotic armory - high heels, wigs, glitter - some very exciting infusions, somersaults and lots and lots of queerness will guide our way out of this filthy hole.