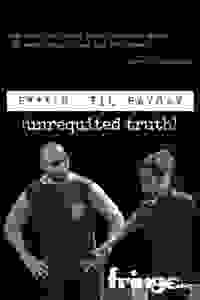 Part of FringeNYC: 2015. Rocky Mountain highs. Death Valley lows. Two bar-backing, bantering best buds are F***'d 'Til Payday. Frank and Neetol only have each other to survive their night shift. The truth hurts, but it also sets you free.

"The material of the show ranges from light and clever to emotionally demanding, and though there are strong performances, particularly from Sandford and Rahman, often scenes feel flat...Ultimately, 'F***’d 'Til Payday' deserves to be applauded for its emotional vulnerability and commitment to challenging the norms of theater, calling attention to the ways in which performance itself is part of our daily lives...It is unafraid to be real, with all the messiness that includes."
Read more