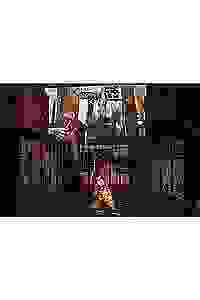 View in admin
Fear in the Western World
NYC: Brooklyn
64
Score it Scored!

Fear in the Western World NYC Reviews and Tickets

A digital puppetry performance (for adults) examining the apparatus of fear and how both the repulsion and compulsion towards guns play into their power to control and oppress.

The piece weaves Horror Film tropes like 1979’s Amityville Horror with Greek mythology to tell the story of a young couple whose daughter is attacked and kidnapped by spirits in the catacombs of a haunted house. By exposing the mechanics behind the performance’s puppetry, FEAR IN THE WESTERN WORLD offers the audience a sense of observational interactiveness that takes uncomfortable detours through violence, race, and the tool of fear.

See it if If you like adult puppetry and a plot that is erratic and confusing at times. Executions were interesting. Some good points to this perform

Don't see it if If you want a clear consise plot, video that is focused. Hate loud noises there is a lot of that.

See it if you want to see one direction for puppetry in the 3rd decade of the 21st Century.

Don't see it if you need a clear plot (this one feels confusing & confused); you want a full-length show (this lasts 45 minutes). Read more