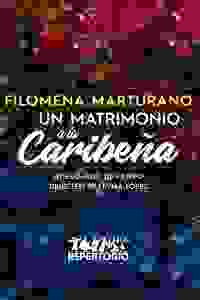 A comedy of wills between a well-to-do bachelor and a woman who wants a better life for her kids.

Based on Eduardo De Filippo’s classic Neapolitan tale, the play follows Filomena, a former prostitute, who has been living with shopkeeper Domingo for 25 years. Domingo is set to marry the young Diana, but Filomena feigns mortal illness to convince Domingo to marry her. When he finds out he’s been tricked, he has the marriage annulled. But Filomena will not give up.

Performed in Spanish with English supertitles.

See it if you like a good comedy with some twists and turns performed by a great cast on an interesting set providing an enjoyable two hours.

Don't see it if you do not understand Spanish and you become weary reading subtitles - there's a lot to read among many characters & they lagged the action.

See it if You like broad comedy. Zulema Clares has superb comic skills. The rest of the cast are also admirable. The set is clever and attractive

Don't see it if You need translation. Formerly it was possible to watch the stage & read. Now a single overhead monitor means missing action to read.

See it if you want to see a well written Soap Opera piece with incredibly good acting and directing. A fun evening.

Don't see it if if you can't speak Spanish and hate super titles. If you don't like Soap Opera plays.

See it if Like a Latin comedy soap: "flawed," wise woman trying to survive and support her sons in an (angry, womanizing) man's world.

Don't see it if Slow start, takes a while to warm up; lots lost in English translation (they talk for 2 mins, screen only shows 1 line). Read more

See it if You want to see a play in Spanish with a great subtitles system. You want to support a great theater!

Don't see it if You dislike plays like Taming of the Shrew that feel a bit out of step with modern story-telling. Read more

See it if You'd enjoy a hilarious battle of the sexes/tug of war family comedy. You'll laugh in the first 3 minutes! Great physicality all around.

Don't see it if you don't enjoy fun family comedies or if you don't speak Spanish and reading subtitles bothers you.

See it if you speak Spanish or can read subtitles the play is funny, with pathos and wisdom mixed in. A full house loved this show!

Don't see it if You don't want to see a play in Spanish.

See it if Grt adaptation of Neorealist masterpiece made famous by Sofia/Marcello:dramatic funny story perform by grt actors in artistic Carib set.

Don't see it if you don't appriciate reading subtitles while viewing. Read more

"Just about any visit to Repertorio Español reveals how many accomplished actors the company has at its command. This time around, the name to note is Zulema Clares as the title character…'Filomena Marturano' is often fun, but you might find yourself becoming a bit impatient with its cast of indefatigable schemers."
Read more