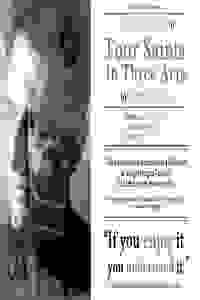 View in admin
Four Saints in Three Acts
NYC: Brooklyn
81
Buy tickets from $20 from the Box Office
Score it Scored!

A solo show, based on the works of Gertrude Stein, by actor David Greenspan, playing 66 unique roles

Continuing Greenspan’s work of creating solo renditions of plays from the 1920’s,  Four Saints in Three Acts is an adaptation of a radical libretto by famed modernist writer and art curator Gertrude Stein. Originally performed with music by Virgil Thomson, Greenspan will perform the script only, allowing a lyrical interpretation to set the tone for an evening where sound and words are the focus.

See it if love one person shows or love David Greenspan. Absorbing trying to figure out the narrative though there is none - yet there is.

Don't see it if Need a story versus moments. Hate one-person shows. Don't like non-linear shows.

"Watching Greenspan perform this play, with his silent-screen expressiveness and full-body eloquence, is like watching a manic movie montage spliced together from bits of film, each brief segment making a kind of sense in its moment, independent of the whole."
Read more

Greenspan…is, by turns, grand, coquettish, robotic, confiding, irritated, officious, and prayerful. He strikes melodramatic poses…he briefly assumes a mantle of piety; he bursts into giggles over the madness of it all. He often seems to be listening to the prompts of voices only he can hear. Indeed, you could say he has been possessed by Stein's restless spirit; this is a performance as antic, impish, and as impossible to parse as her charming and bewildering words.
Read more

"David Greenspan raises the bar for actors. In fact, he is so good, I can affirm that I would watch him read Gertrude Stein."
Read more

"Greenspan does the script in 90 minutes on a simple and quite beautiful Yuki Nakase Link set."
Read more

Greenspan isn’t always totally clear when switching points of view, but made up for this by turning the entire, long script into a wonderland of gestures, vocalizations, postures and movements. His eyes and his hands are masterful communicators. His lean body’s dancelike movements add dimension to the onslaught of words. This is a performance that must be seen to appreciate how mindboggling his accomplishment is.
Read more

"The theater is alive in a very special way at the Doxsee... With each gesture, one almost feels moved, blessed with the mystery of saints revealed in a complete, yet subtle way. The authentic practice of the art of speaking is revered."
Read more

"David Greenspan’s performance is lyrical and lovely, humorous and intriguing… beautiful. He is magical."
Read more