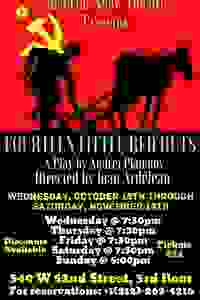 The policy included "Dekulakization," the elimination of an entire class of peasant deemed to be counter-revolutionary because they owned livestock or small plots of land, and then famine as a state policy. More civilians lost their lives in what amounted to a war against Russian and Ukrainian peasants than in all the combatant nations during the whole of World War I. Platonov did not write his play with the benefit of any intervening time between the ideologically inspired and organized mass murder of the nineteen-thirties. He wrote it as the murders and the crimes were being committed.