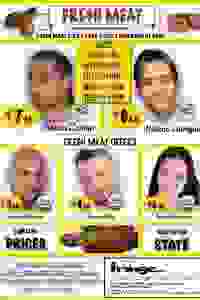 Part of FringeNYC: The Scared Straight program is not what young Tony Zigman expected when placed in a cell with inmate "Junebug" Gonzalez. Follow this odd couple as they both win back their life and love, while airing a subtle commentary on the Prison Industrial Complex.

FROM THE ARTIST:
This summer will see the world premiere of "Fresh Meat," at The New York International Fringe Festival: FringeNYC. Written by and Starring Hamza Zaman, this play traces the very real difficulties convicted felons face upon their release and trying to integrate into society.

"I am very honored that FringeNYC has accepted my play to their 20th Anniversary lineup. While I am not here to preach, I wanted to tell a compelling tale, where through the lens of an irregular friendship we can focus attention on the plight of an underserved segment of society. I hope you enjoy," said Hamza Zaman.

"Fresh Meat" gives audiences the opportunity, to follow a convict, on his journey to re-assimilate back into a society. While examining how the people we stigmatize, aren't always deserving of such great disapproval" said Director Jonathan Rosner.

At the Teatro LATEA at the Clemente 107 Suffolk Street (between Rivington & Delancey).

See it if you want to support a young playwright-actor who has an important message to share with the audience.

Don't see it if you expect a sexy production.

See it if ...you like unusual themes and quirky characters, especially if you have concerns about how ex-prisoners fare when returning to society.

Don't see it if ...you are bored by prison scenes or put off by thuggish behavior, boyfriend-girlfriend problems or father-son conflicts.

"In this new play written by and starring Hamza Zaman, we delve into the thickets of justice, prejudice, and the will for self-improvement...All the evildoers get their just desserts, and the rest of the lot realize all of the dreams they had been striving for. 'Fresh Meat' is optimistic, and makes no bones about what it hopes all convicts will achieve in that perfect world which resists our many attempts to seize it."
Read more