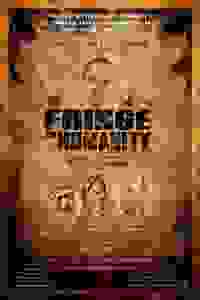 Primitive Grace Theatre Ensemble presents this world premiere drama about a dysfunctional group of filmmakers in the capital of a lawless Third World country. Starring David Zayas of 'Dexter' fame.

A film director in recovery from heroin addiction, a PTSD-addled cinematographer, a washed-up movie star, a megalomaniac producer and his ex-starlet wife, and the rest of the motley crew gather in a hotel to put the finishing touches on a script scheduled to start principal photography. Inevitably, plans spin out of control as conflicts erupt. But when the violence of the city penetrates the hotel, everyone’s humanity is called into question.

See it if you like action in a play. It goes by quick and the excitement never dwindles.

Don't see it if you have an aversion to bad language or adult content. This is not one for the kids.

See it if you'd like a behind-closed-doors look at low budget movie making; can tolerate every scene & every actor SCREAMING rapid-fire wordy dialogue

Don't see it if complex, convoluted LOUD 'be-bop' language, four-letter words, hair-trigger anger and crass behavior is not for you Read more

Don't see it if you are looking for insight or profundity. Or if you like a quiet night of theater. It starts at a frantic pace & maintains it for 90 mins,

"It’s an adrenaline-fueled feast. Paul Calderon wrote, directed, and stars in this razor-sharp look into the world of out-of-control pre-production film chaos. It’s funny and bleak and tortured and true...Calderon’s writing is energetic and virile. It’s foul-mouthed and quite brilliant...He has expertly drawn the characters and they are recognizable in all of their human fragility and dramas. As a director, he incites a relentless pace that keeps you glued to the unfolding madness."
Read more

"The underbelly and rejects of humanity in this play are the loathsome characters portrayed who are willing to go to great lengths to get what they want. Their use and abuse of partners, friends, and co-workers also reflect their lack of morality. If you are in the business, you may recognize and/or identify with a number of the people in this show. I would not recommend this play. It is too loud, too violent, and too intense with a very annoying background soundtrack."
Read more

"The actors had nowhere to go because they started at a place of unrealistic tension. The audience had no idea why everyone was so upset off the bat...The story is very interesting and the ending was meaningful, but it was hard to care after the first thirty minutes due to the yelling...Instead of relying on this interesting story, it was directed as though the audience would not understand these 'complex plots' unless they were being yelled to them."
Read more

“The laughs come fairly thick and fast in the play’s first half. But once the action turns serious, a dystopian tone descends and the film’s cast and crew quite literally are fighting for their lives. Their craven machinations don’t quite ring true and an extended and overwrought shouting match ensues that clouds the impact of the moral debate. Furthermore, it’s hard to care what happens to any of the characters as one is more self-absorbed than the next."
Read more

"The talented and giving ensemble pulls the audience into the hotel room and continues to build the energy to a fever pitch as the story unfolds. Paul Calderon’s 'Fringe of Humanity' is a high-octane, cocaine-fueled explosion of storytelling that keeps you glued to the next word, action, moment...Calderon’s strong and passionate writing lays the groundwork for his ensemble actors to embody his words. His direction freed the ensemble to raise the stakes of their characters."
Read more