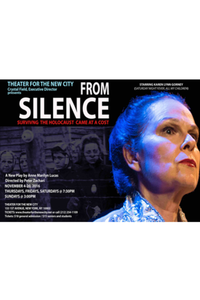 From Silence NYC Reviews and Tickets

Theater for the New City presents a new drama about a traumatic event that forces a grandmother to reconsider her silence about surviving the Holocaust.

Esther’s world is turned upside down when her daughter, Deborah, rushes home to say that their New Jersey temple is on lock down and her granddaughter, Elaina, is trapped inside. Esther lived through the Holocaust but never talked about it, despite pleas from her daughter and granddaughter—it was just too painful to recount that part of her life. During the endless wait, Esther realizes it's her duty to share her story, but will it be too late for Elaina to hear it? Karen Lynn Gorney, star of the 1977 movie 'Saturday Night Fever,' headlines the production.

See it if you appreciate drama examining memories, perspectives, frailties and relationships among three generations of women living alone together

See it if you are willing to sit through an emotionally wrenching play about the Holocaust, which emphasizes why it is so important to "never forget."

Don't see it if you prefer something light and fluffy. Read more

See it if You like a sensitive portrayal of the lasting effects of the Holocaust by a superbly talented cast.

See it if You are interested in Holocaust stories, and their relevance to life today.

Don't see it if You are uncomfortable with stories about the Holocaust or contemporary shootings, or if you are in the mood for something light. Read more

See it if U want to see a Jewish holocaust piece. This is a 3 generational family of women's story dealing with healing through opening up about past~

Don't see it if You're looking for anything new or insightful. This was a forced, so-so acted/directed & unoriginal play. The lead was in her 60s, not 90s!

See it if you are interested in seeing a thoughtful illuminating drama about the effect of the holocaust on children and grandchildren of survivors.

Don't see it if you are expecting a light hearted evening or you think these issues aren't your problem because they won't happen again. Read more

See it if You want to see something deep and important and are a student of The Holocaust and it's relevancy to today's world.

Don't see it if You are seeking a feel good and entertaining play. This is a work that will leave you with a deeper understanding of this important event.